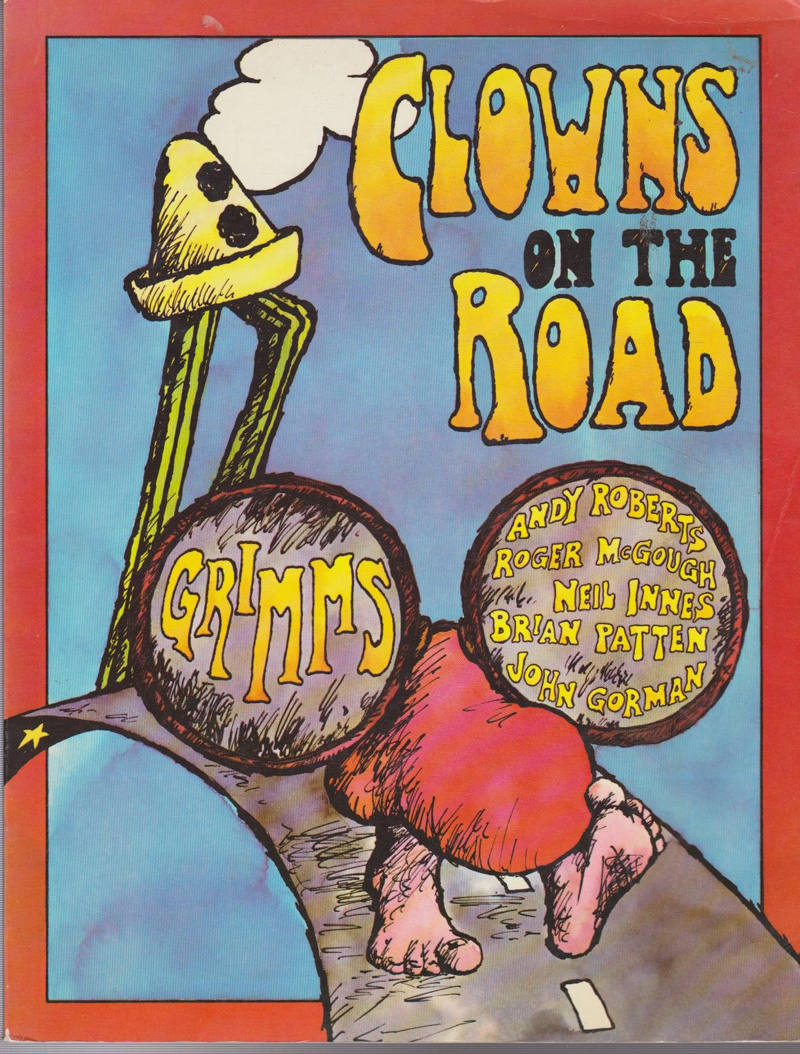 Grimms: Clowns on the Road
This collection of words and pictures is a vivid distillation of Grimms:itinerant poets,musicians and clowns.

When I first saw Ollie he was a drummer. Within 6 months, he was the best guitarist in Liverpool. With Patto he played vibraphone. I once recorded with him playing Hammond organ. He was the greatest natural musician I ever knew..." 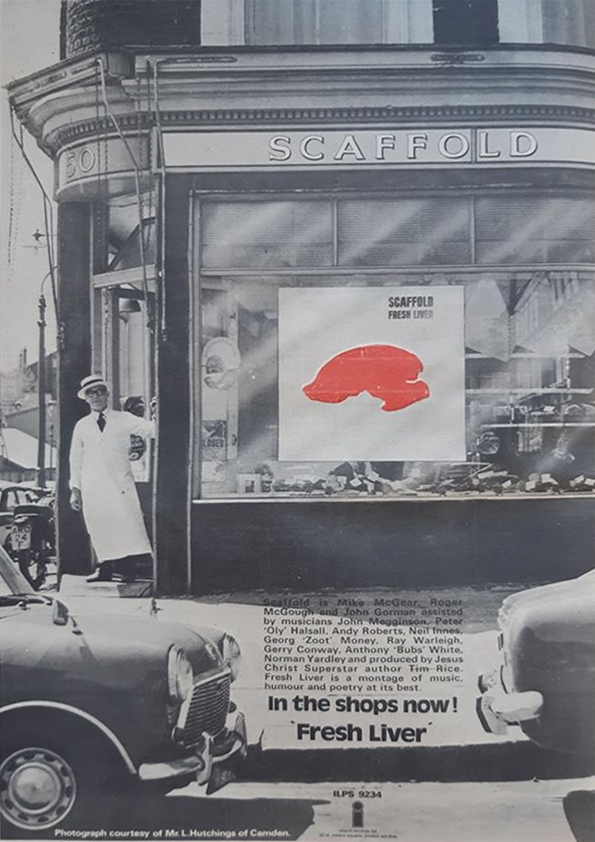 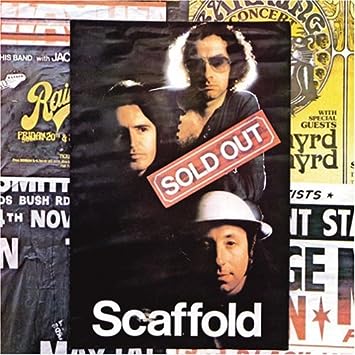 Take It While You Can

I wrote this as a rocky album opener, and hauled in Ollie Halsall, the greatest Liverpool guitarist of the 60s, to play as only he could all over it. When I first saw Ollie he was a drummer. Within 6 months, he was the best guitarist in Liverpool. With Patto he played vibraphone. I once recorded with him playing Hammond organ. He was the greatest natural musician I ever knew..."

" I first met 'Admiral' Halsey when he was playing in a talent contest at the Rhodes Hall in Bishops Stortford. I was there supporting a friend's band from school. John's band, Felder's Orioles, won first prize. My lot came third. Later on he played with Ollie in Timebox and Patto. Later still he was in GRIMMS and the Rutles. he now manages the best pub in Cambridge" 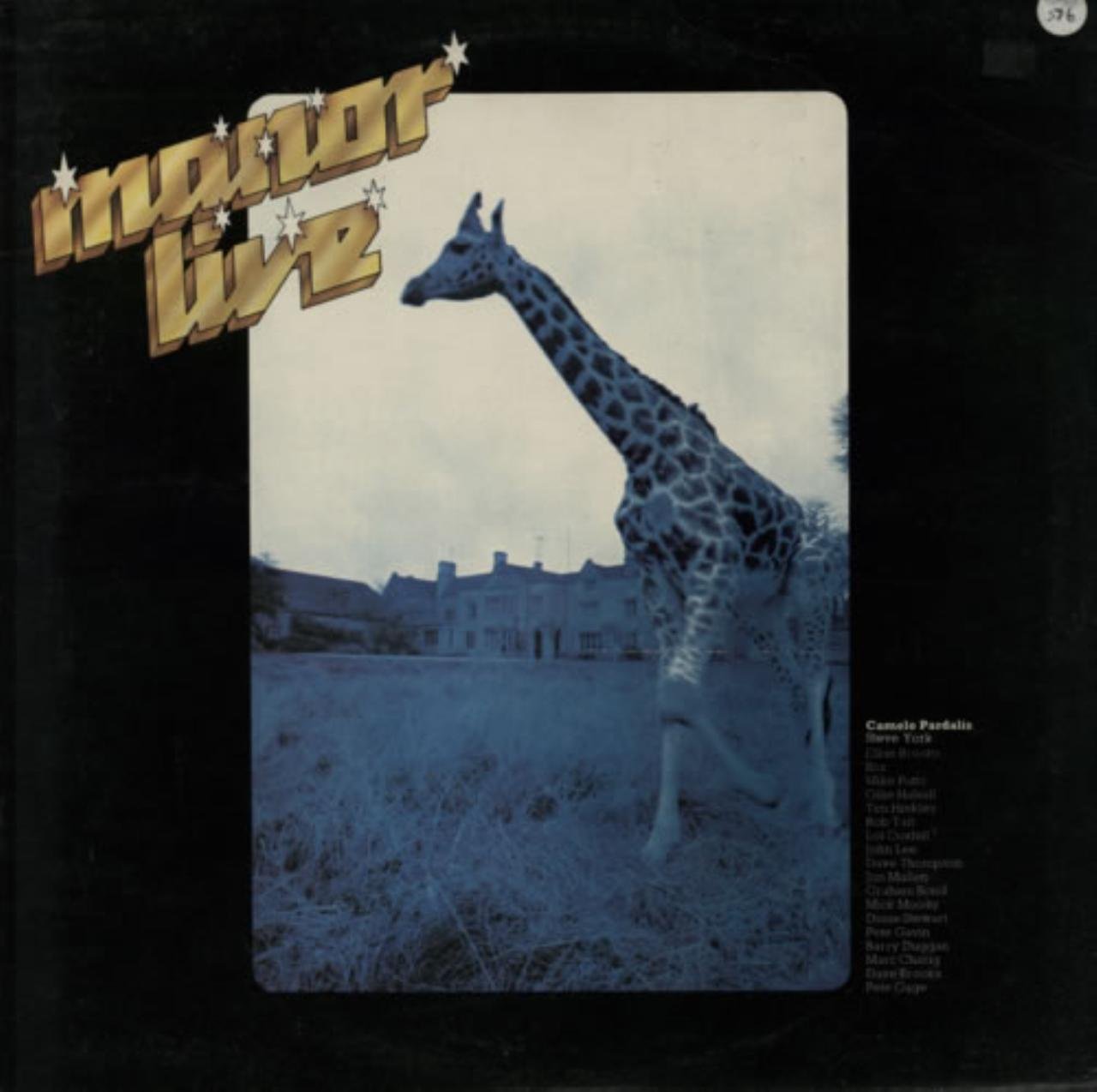 This is an album I put together at Virgin Records Manor Studio. I was on crutches at the time with a broken pelvis after a car accident.

"This record was a mess but it is an interesting document. The name, chosen by Virgin Records, is Latin for giraffe. A pregnant giraffe was brought to England from Spain for the cover photo. None of the musicians were paid."

He was one of the best guitarists I have heard. He played passionately right out of his heart and always had the most fabulous original ideas. At the same time he was always very tasteful. I can still hear his unique guitar sound, 35 years later – clear and shimmering.

"My favourite memory is when I played old Louis Jordan records for him. Few English musicians were acquainted with his music at the time and Ollie had a revelation when he discovered this link between r & b, jazz, and rock ’n roll. I wish I had had more opportunities to play with him. He was one of the great!" 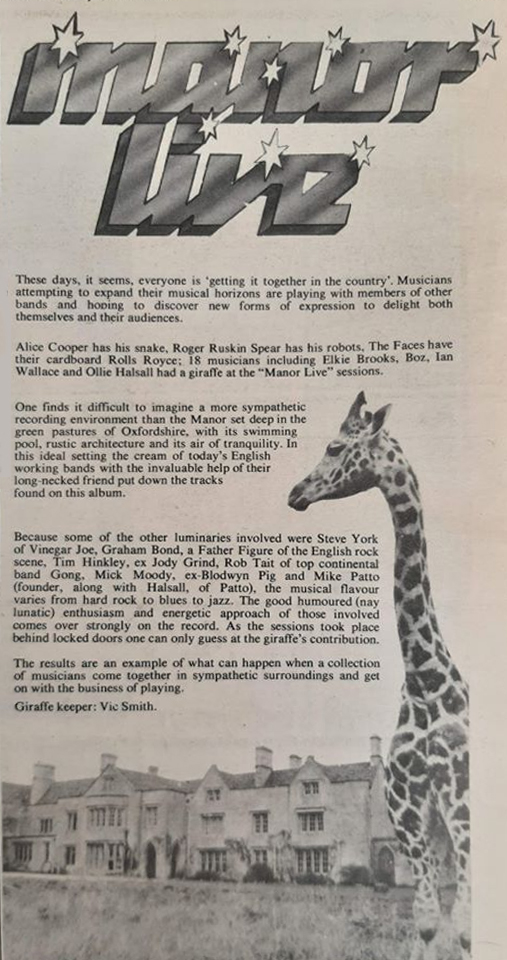 My diary tells me it was Wednesday September 3rd 1973 - Neil Innes, Ollie, Zoot Money, Andy Roberts and me at the Workhouse Studios." 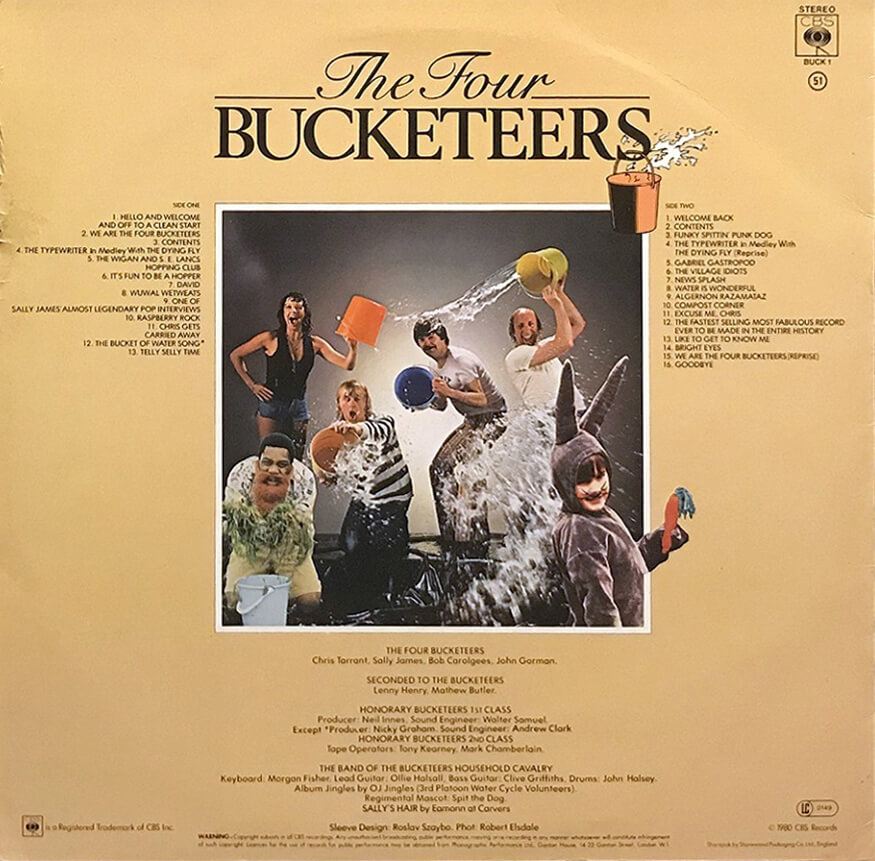 The TISWAS house band [The Bucketeers Houshold Cavalry] included John Halsey [drums], Morgan Fisher [keyboards] and Clive Griffiths [bass]. On the records - produced by Neil Innes and arranged by John Altman - they were joined by Ollie, making this, perversely, the nearest thing to a Patto reunion! Around the same time, Ollie, Clive and John also played a few dates in Europe backing Kevin Ayers

This album is also listed on the John Otway page partly because of the above connections, but more as an excuse to show another photo of the lovely Sally James!

This Is What They Want
TisWas article from, of all places. The World of Personal Number Plates magazine [Chris Tarrant had one] 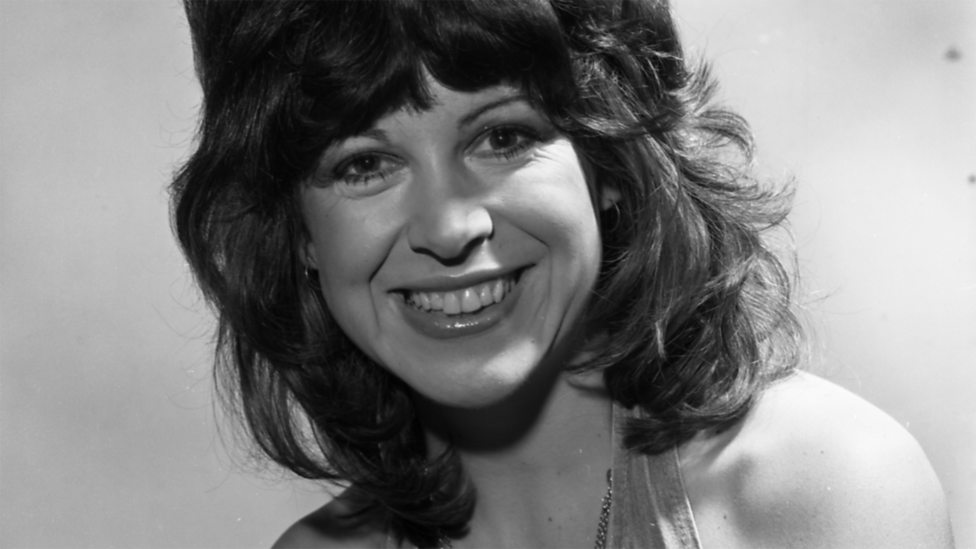 If Your Love Don't Swing

Ollie plays lead guitar on the B-sde of this Decca single from 1968, alongside some former bandmates from R&B Incorporated, John McCaffrey [bass] and Bill Lovelady [drums]

If Your Love Don't Swing

Ollie is uncredited on Hellhound and miscredited as Russ Ballard on Lover's Prayer.

Duffy Power (born Raymond Leslie Howard; 9 September 1941 – 19 February 2014) was an English blues and rock and roll singer, who achieved some success in the 1960s and continued to perform and record intermittently later. [Wikipedia] He was, also, a friend of Mike Patto.

John McCarthy [no relation to Mike] pointed me in the direction of an obscure Duffy Power album track ['Lawdy Miss Clawdy] from 1970 on which Ollie played.Having finally tracked it down, I am 99% certain it's him on two other tracks as well. It's the unmistakable sound he had on the Timebox album tracks. Unfortunately, he is uncredited on 'Hell Hound' and miscredited [as Russ Ballard] on 'Lovers' Prayer'. The sleeve notes are all a bit suspect anyway - on 'Lawdy' they credit Bob Henrit on drums - of which there aren't any! - and the recently and sadly departed little Jim Rodford on bass - but it's a double bass, which I've never seen or heard him play. 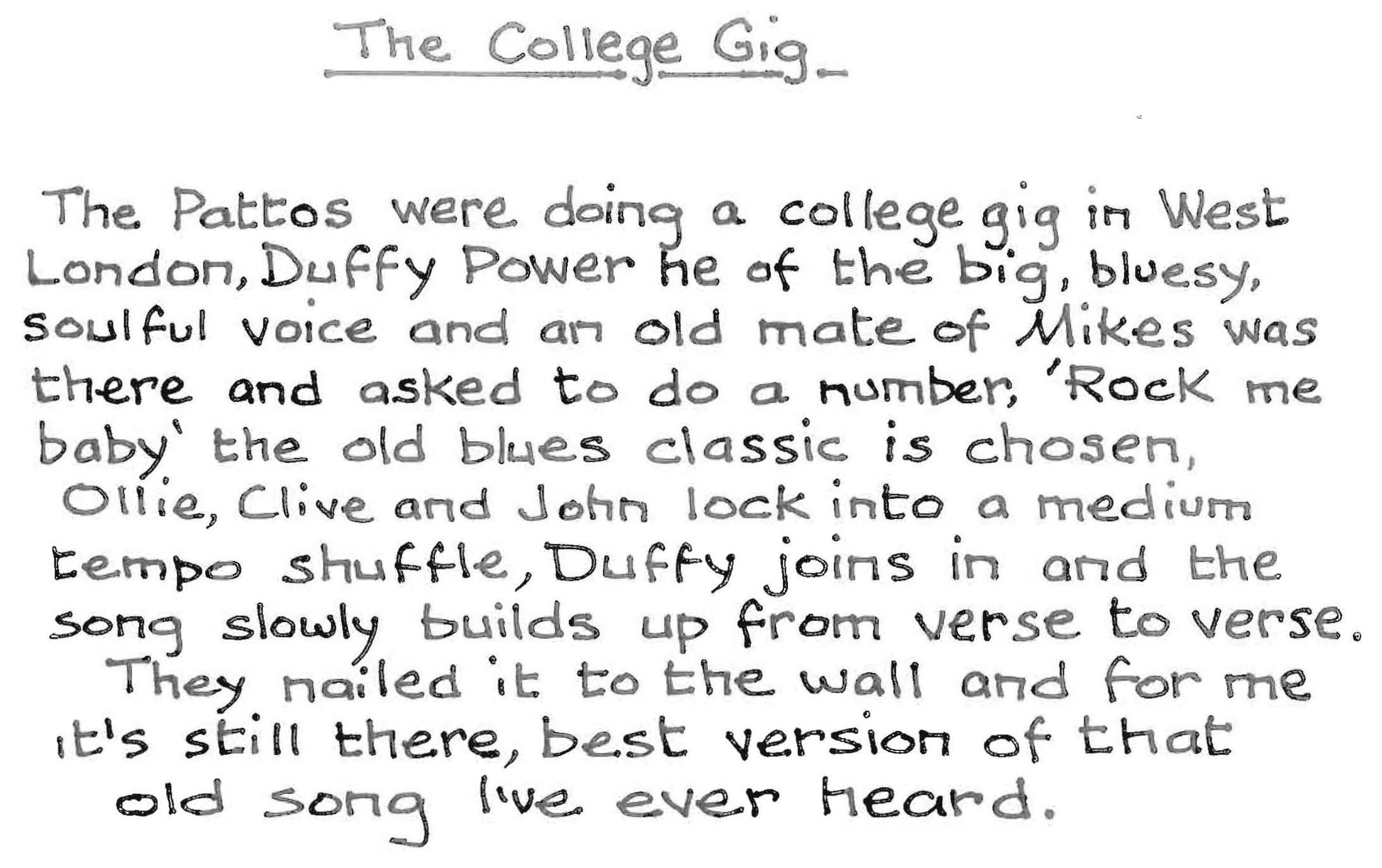 This Is The Time To Get Merry

Not managed to find this yeti

OH contribution unclear although it's almost certainly him on: 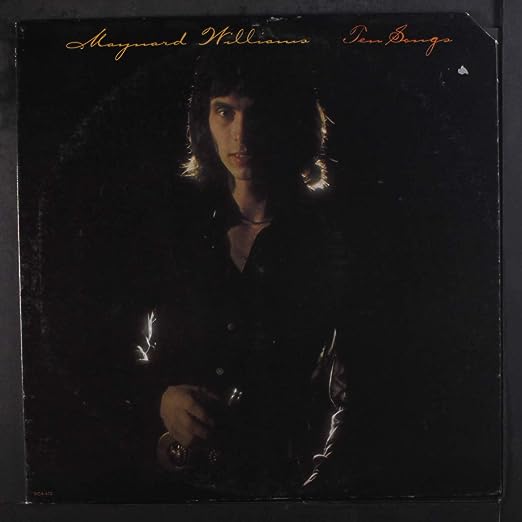 Reggae For It Now

One More Reggae For The Road

Bill was the guitarist in one of Ollie's earlySouthport bands, The Music Students.

I am assuming only played on these, although there is no evidence [?]

Ollie toured Sweden with Bill in 1980, however, where he met Zanna Gregmar. They then settled in Spain where whole new career opened up for them.

NEIL INNES and THE RUTLES

The long-standing rumour of a 1974 album, which also, supposedly, featured Ginger Baker, may finally be put to rest by this report:

I just briefly spoke with Denny Laine who happened to be in town (Cleveland). He was sitting, in by request, with Peter Asher (of Peter and Gordon) and his band. He performed the song he did with the Moody Blues, 'Go Now'. I asked him if he had recorded with Ollie and, if so, what was the name of the record. His reply was that, although he had jammed with Ollie many times (Denny owned a club in the North and Ollie would come and sit in with the bands), they never recorded anything together. He said that he'd originally met Ollie through Mike McGear. I'd also mentioned that, for my money, Ollie was the best electric guitarist ever. He agreed."

It is, however, a little odd since in a 1989 Japanese magazine interview, Ollie mentions playing with Ginger Baker on this elusive album.

Ollie certainly played guitar for her at a Hyde Park free concert 31 August 1974 and there is always the possibility he may have been on some her recordings from that time. No evidence though.

"Glinting and pristine in her white shirt and blue jeans, Julie Felix adequately performed her Hampstead liberalism despite valiant attempts by a slightly somnambulistic looking Ollie Halsall to elevate the set into something more concrete than a succession of pleasant songs. She smiled more that anyone who was on stage that day and quite a lot of people seemed to enjoy her."
-New Musical Express 7 September 1974

I first met  Mike Patto in 1967, in my home town of Kings Lynn in Norfolk. Patto was mates with Boz Burrell, later of King Crimson and Bad Company. I got to know Boz through my older brother Keith who was a roadshow DJ. I didn't know Mike well, but we met a few times and he was always charming funny and full of spirit.

"By 1975, I was writing songs with Geoff Westley, then of the BeeGees, up to the Main Course album (Jive Talkin' era). Geoff and I were signed to RSO and we were funded to go into the studio to record our new stuff. The studio was Tom Newman's Argonaut barge, moored at Little Venice, London. It was previously Richard Branson 'office' till he sold it to Tom, who had made a bit of money out engineering Tubular Bells. It was mid winter and freezing.

"I remember, the barge was locked into the ice. We booked a rhythm section of Alan James on Bass (Cat Stevens Catch Bull at Four) and Simon Phillips on drums. Simon was still only young. Around 17. consequently, his mum and dad would bring him to late night sessions and sit outside in their car in the freezing cold. But man could he play anyone off the stage, even then.

"All the guitar work was played by the one and only Ollie Halsall. Ollie was wonderful to be with. He was heavily into his politics - The Worker's Revolutionary Party. So he was always arriving straight from being at a meeting or protest with Vanessa and Corin Redgrave.

"He was so excitable and brimming with life. Passionate is not a strong enough word for Ollie. But when he picked up his guitar, he was in another place. His body contorted and his head swayed. I've seen pianist Keith Jarrett move like that. Immersed in the music and a higher place. Especially on the softer songs.

"But when it got to the heavy, rocking tracks, Simon Phillips mercilessly pounded the life out of the drum kit. The Barge was narrow and so it was near impossible to baffle Simon's relentless pounding of the drums. Ollie was driven to turn his amp up to way beyond 11. At one point, he lifted his head up from it being near stuffed down the cone of his speaker and yelled, "How am I supposed hear what I'm playing when I'm in the same room as F**king THOR over there". It was all in good fun. Simon offered to move his kit a bit further away. Ollie suggested to somewhere around Watford.

"It was a marvellous experience. In breaks we talked about what Ollie was doing. His Work with old mate Patto. It was all over too quickly and our paths never crossed again. Next time I heard Mike and Ollie playing together was at Playboy's private mansion in Hertfordshire. I was a house guest and the room to room sound system had a 33rpm album jukebox. The most popular album that was played for the week I waster, was Boxer, Below The Belt. It was/is an awesome recording.

"Not too long later Mike sadly died. I recall the benefit gig in London for his widow and family. Years later, I was again saddened to hear of Ollie's passing. But the memories remain vivd and special. Thanks for listening."

A school friend of mine (drummer / pianist in our band , Chris Ainsworth Davis did that tour with Ollie and Bill Lovelady. I remember going to one of the rehearsals; Chris had been with Morrissey Mullen for some time and Dick Morrissey, Jim Mullen (who didnt get the Brecker Bros gig because he didnt read - music , that is!); really nice guy Jim and a lovely player.

"When Chris was with them, the bassist was Clive Chaman (also from Trinidad, as was Chris). Clive played in Hummingbird with Bernie H and later with Jeff Beck. Lots of fine players followed them.

"Chris used to tell me how Ollie enjoyed The Who and Michael Jackson, specifically 'Squeeze Box' and 'You Got me Workin' Day and Night'. At the Bill rehearsals there was no sign whatsoever of Ollie's virtuosity."