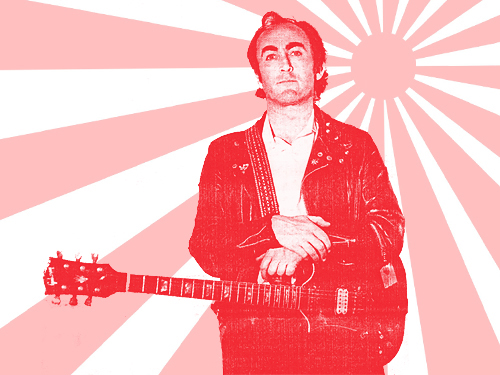 This article was originally written in English for Guitar Player magazine, April 1989 [although never published in the UK edition to my knowledge] and translated for the Japanese edition [Guitar Magazine]. The translation back to English was done by Satoru Yonemoto and I'm now sort of translating his [with respect] 'pigeon English' back again - so it's going to end up like Chinese whispers! (or, perhaps, Japanese whispers!) This is just the bits of any interest.
Here goes:

BJ: Tell me about when you started playing guitar

OH: I owe it all to my older sister, she had the guitar. It had only one string and I played it like that for about a year. Gradually I got more strings and eventually the complete set. I played simply bass lines at first. I studied the Cliff Richard and the Drifters (Shadows) live album 'Cliff' and learned all the bass lines. I played drums first in an R 'n B band in Liverpool (The Music Students). When I was about 18 or 19, I started to play electric guitar on stage.

What kind of guitar was it?

A very good guitar - I still dream of having another one all the time - brand new pure white Stratocaster made in about 1960. Because my band (Timebox) was appearing on BBC colour TV ('Colour Me Pop', 1968) I splashed out a bit of money on it. Our manager said "You're going to appear on colour TV in a grey suit and a white guitar! He bought some coloured plastic and stuck it all over the guitar, making it a bit psychedelic.

What do you think of Allan Holdsworth?

Allan is a great guitarist. Besides which he is good at the violin. Though I don't know what he's done recently, he played the guitar like a saxophone - like the keyboard and the saxophone.

You taught Allan how to use the tremolo arm?

Did Allan say that? I don't know. I often used the tremolo when playing with him. It seems he started to use it after watching me.

Tell me your memories of the Tempest years

Both Jon Hiseman and Mark Clarke were great players We had a great time though we broke up over disagreements. Jon would do a 25 minute drum solo and Mark and I were supposed to re-appear from the wings. One night Mark didn't reappear - he'd gone to sleep in the dressing room - terrible man! In those days I used an Acoustic amplifier producing a very loud sound. I had a good time. I often remember those days. It's already fifteen years ago!

What guitar did you use then?

Gibson SG Custom with 3 humbuckers as it was light and easy to play. I like the Les Paul sound but they're too heavy. I don't like heavy guitars or new guitars. The Gibson made a good sound but it was in very bad condition. The frets were worn away like a fretless guitar.

Why did you leave Tempest?

There was a striking contrast between my and Jon's musical ideas. I don't remember the immediate cause, probably not wanting to tour so much. So there was no quarrel between us as Jon is a complete professional. In those days I didn't actually like his drumming. Now I like it a lot. Present day drumming is dry and has nothing distinctive about it. It stands to reason that I would like to listen to individualistic warm-hearted players like Jon or Ginger Baker.

What were your impressions of working with Ginger Baker?

I played guitar and sung on with Ginger Baker. It was great to play on that. The recording session was for Denny Laine's solo album. He had been at odds with Paul McCartney. He's been active in Madrid.

Are you active now?

At present I'm working in Madrid, Spain. I produce for an independent label. Recently I've been doing more as a producer than a guitarist. I produce the band 'Maroquin'

Do you still play guitar?

Yes I do. I often play it. For example the rehearsals with Kevin Ayers. We toured London, Holland, France and Belgium and then Japan before Christmas.

Did you go into an awful slump at one time?

I nearly did so. I got rid of the life of alcohol. My life has all changed. I feel good and my head is clear. Three months of abstinence have passed. I had a heavy time in a variety of bands through the 60's and 70's but it was a fantastic and wonderful experience. So I was lucky to have played with many interesting people.

Which album contains your best playing?

I've really taken to my playing on 'Falling Up' with Kevin. Just a little like Giacomo Puccini, very sweetly and slowly. The solo on 'Am I Really Marcel' is good though there are few notes.

Of course my playing was more complicated in the Patto years. On Patto's second album the solo in 'Hold Your Fire' is good. And I like Patto's first album too.

After Tempest how did your guitar style change?

My style has changed as there are less notes than before and the sound is clear. My fingers can't move as well! I didn't choose the way of Allan Holdsworth and Jeff Beck.. I've always respected Jeff Beck. His guitar is brimming over with originality. I can say, without exaggeration , that he is the best guitarist in the whole world.

Do you still play the SG?

Yes, not the Custom as in the Tempest years. I bought one made about 10 years ago. It was converted to left-handed by Gordon Adams. I recently attached a Kahler tremolo arm to this one. I had always been anxious about it staying in tune. Now it's fine.

Do you play acoustic guitar?

Yes but I would like to continue playing loudly using the electric, tremolo and effects.

Do you have anything to say about the present music scene?

In the USA and UK it's all slash metal and heavy metal. I was never interested in that music. But I think there are many guitarist worthy of note. Eddie Van Halen is especially good. His playing is very humorous and has personality, it's my favourite. 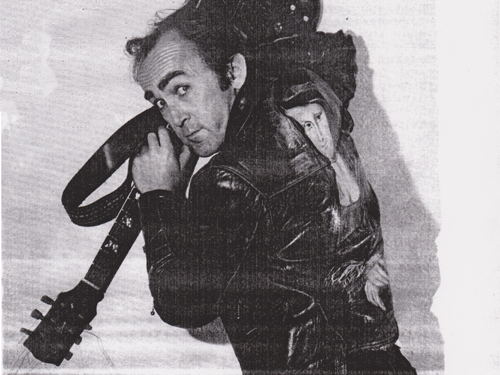 The Japanese People loved Olli. He went several times when we were together to give concerts alone, or to give lessons to Hirohito's boys. Hirohito contacted him in Deya, by the way, via some emissary, to teach his kids for a week or as much as possible.

"Olli could have lived at the Emperor's, no problem, but he didn't, I think I would have! He had a huge fan base apart from Kevin and other people's music, just his brilliant musical talents were appreciated by very well educated connoisseurs, as the Japanese can be. When they want to play like a player, they work so hard to do it perfectly, and Olli had been very famous there as a brilliant guitarist and arranger.

"He made a lot of money giving lessons to people like the Emperors kids, and famous people's children who paid him $1,000 an hour for a week of 'etudes'. Olli felt like he was his own man there where he was always the brilliant wall of sound behind so many others.

"It tickled him that the Japanese went crazy for him, he couldn't understand or believe it was for him and him alone, he wasn't the wizard behind the curtain in Japan, he was just the wizard, and he really needed that love, straight at him, no backing someone up. It was so important for him to feel that, alone, he had made it, he wasn't a back up man and he was humble modest sincere and very deeply appreciative of that fan base for him, and him alone.

"He never got it that he could have done anything. He was a brilliant drummer, guitarist, arranger and composer."

'Olli' was how he spelled his name in correspondence with Michelle.