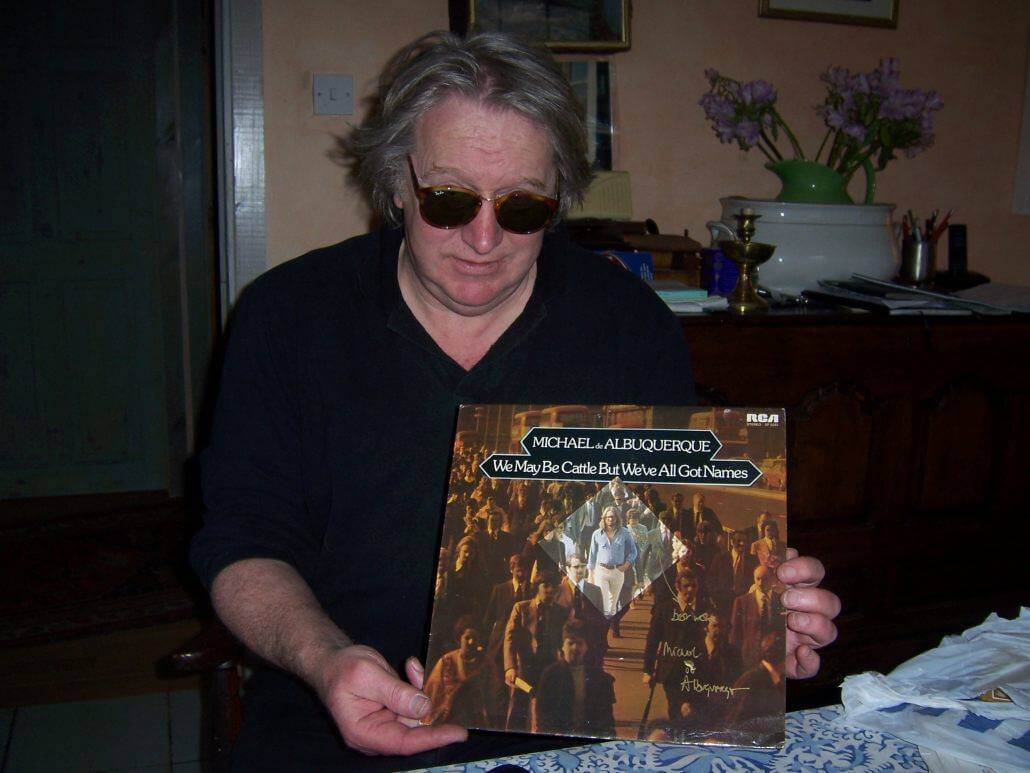 My mum came up with that title. She was sitting in the queue of a local surgery, and one of the nurses was issuing tickets, so that whoever had this particular letter or number came next, and they must have called out a number or a letter to my mother who said, 'Really, we may be cattle, but we've all got names,' which I thought was marvellous, so I took that name, but yes, that album is one I'm particulary fond of because it has a track that was recorded by Tim Hardin called My Darling Girl, a piece that I was very happy with. And the other player that played on all the tracks, is a legend to many people in the 70's rock scene, a guy called Ollie Halsall who is the most brilliant guitarist, the most fun guy, who very sadly died of a drug overdose four or five years ago."

We May Be Cattle, But We've All Got Names The Story of the Cattle sessions

The road to Ollie for me, like lots of other guitarists, was: The Shadows; Eric Clapton; Frank Zappa . . . Ollie. i.e. Buy shiny guitar, Eric's Telephone Blues, Frank Zappa Hot Rats . . . Ollie. Eric got everyone playing in a position and bending every other note. Zappa used the same Les Paul with the same volume but a vastly extended musical vocabulary . . . then Ollie.

I first saw Ollie playing with Timebox in a London club - he was using a Telecaster with the highs rolled down and playing more rhythms and notes than I had ever heard before. Where most British blues players played very much on the beat (four, eight or sixteen notes to the bar - and where, in the words of Walter Becker, these were better described as guitar 'owners') - Ollie, being a musician (big difference), used rhythmic and harmonic variations that bore little resemblance to what went before.

The first recording Ollie did for me was on the We May Be Cattle But We've All Got Names sessions at Wembley (1973). He turned up with his Fender Super Champ (which acted as a pre-amp for his stage rig, and sat on top of his Super Reverb) and the white Gibson SG Custom. If you haven't heard the two chorus solo [2m 22s] Ollie did on Oh Woman (the whole of which was recorded live), it is highly recommended. Check how, at all times, Ollie's notes are related to the relevant chord - no hitting the same notes and hoping they fit. Along with the first chorus 'pull-off' to the open G-string and the ascending burst of triad triplets that he does on the 4-chord in the second chorus (I had never heard him use this phrase before - it is lightening quick, deadly accurate and very difficult to do), this is one of Ollie's best solos.

The second session for ' . . .Cattle' took place at Trident Studios. Ollie turned up in his bedroom slippers with the white Gibson and no amplifier. He used my Ampeg Portaflex bass amp (15" Speaker) and did the monumentally classic Dribble Dribblesolo [2m 45s] in one take - it sounds like Ollie really made an effort with this solo - thanks Ollie!

(He also contributed his highly characteristic gruff vocals to the middle section of this song which is about my ELO experiences of sycophants in our business!)

Ollie always tuned his guitar with the root/ fifth/octave method (which is the best vis-a-vis the minute inaccuracies of the guitar neck). i.e bottom E (open), B on the A-String and E on the D-string. Then he would take this three note grouping up string by string - A/E/A, D/A/D, G/D/G. I asked him once about his technique: Showing me the white Gibson, he said that the very low action and rolling the "very critical" full treble down a bit to aid the seamless flow" of hammer-ons and pull-offs, were integral.

It was interesting that he picked the guitar quite hard and his hammering-on and pull-off left hand action was vigorous, which explains the good definition. Despite his modesty, in my experience of his playing, whether using the 'sweet action' white Gibson through his Fender Champ, my Ampeg bass amp or a borrowed SG with a bad action, through a Fender Twin, it didn't make any difference at all to his ability to play great sounding speed. The intro to Catharsis is played direct into the desk.

I like Ollie's trick of using pull-offs on to an open string e.g. in solos on Dribble Dribble, Occasion,  Sweet Mirth (very interesting phrase on this) and Say What You Want  (Stalking the Sleeper album)

These are always nice harmonic surprises.

He had a great easy going funny manner socially, ready to get a laugh out of anything. It might give some insight into his ways if you have a look at the Don Martin comic books that he loved. My brother, George, was having a drink with Ollie in the bar of the Oxford Poly after a Patto gig when a fan approached, enthusiastically, saying "Ollie, you were FANTASTIC". Ollie (not being taken in by flattery) replied "Yes, IT was, wasn't it!?" and carried on talking with George.

He wasn't being rude, he simply wasn't interested in that sort of thing. On the sessions he did with me he was enthusiastic, hard-working, quick, funny and very generous with his contributions to the work. They don't make them more talented or more gifted than Ollie. I feel privileged to have worked with him . . . see you again someday, Ollie.

His playing stands the test of time and even got a mention in a magazine called Guitarist. And I was just falling off to sleep one night reading some letters at the back and it said, readers of the Guitarist, all this business about Joe Satriani and Steve Vai, and all this business is such a load of old waffle, because we had a guitar player in England called Ollie Halsall, has anybody ever heard of him? If not put on a track of Michael De Alburquerque's called Say What You Want, and listen to that solo, and that was the really nice little mention for Ollie who I felt never got the recognition of the wider audience, but he was certainly known among the musicians, and I was certainly happy with that album.

While there is no solo on [the title track], Ollie's guitar is fundamental, and he is featured playing synthesiser .

While talking of this album I wonder if everyone has heard Ollie's wonderful intro to the track Catharsis ?

Also not to be missed is the intro to Occasion (an exchange between Ollie & pedal steel maestro BJ Cole) and best of all the outro at around 3.30,, following "Its up to you to close the deal." A fabulous, joyous workout with Ollie doing a double-tracked call and response workout ; one of my favourite Ollie interludes and, to my knowledge, the only other recorded example of Ollie playing with himself (!) is on Tell Me Where You've Been from Hold Your Fire. Say What You Want

I remember this session as if it were yesterday and I'll try to set it all down here this afternoon. I was very lucky aged 17 to be asked by Michael to co-produce these recordings with him. This really just involved me giving a few thoughts and suggestions here and there to Michael, usually in his MGB on the drive up from Abingdon. I was and am the greatest admirer of his considerable musical skills and for some reason he liked my input into what he did .. it was a heavenly task for me ..and I was going to meet Ollie !! More to follow I remember having a few beers with Ollie in the bar at Morgan Studios during a break in the Stalking The Sleeper sessions. I was telling him about some of my favourite bits of his solos from Hold Your Fire ... the very melodic lines between vocals on Give It All Away and so on ... whereupon Ollie rather got into the spirit of the moment and declared that San Antone was one of his favourites .. in particular when it breaks in the solo and he does a little repetitive stutter thing .... he sang it .. his feet ( clad in Boxer boots ) stomping on the floor, glint in his eye. He was so much fun, and such a lovely guy. Imagine; you meet one of your all-time teenager heroes and it turns out that he is a delight. He had great presence and charisma. Star quality with absolute modesty.I'll never forget him.

There was no clavinet on this session. What you're hearing [on Say What You Want] is a track that Ollie did where he pulled and snapped the bottom strings .. it was his idea entirely and he just started doing it on the first run through before any of the solos we recorded .. very clavinet like but that's what it was I was sitting a few feet in front of him in the control room when he did it .. Ollie, Michael, Gregg and me .. that's the bottom strings of a borrowed for the day Cherry coloured SG standard 1 The tracks were recorded in the control room with Ollie going direct into the board .. he played about six different solos one after another and the other flourishes you hear are Ollie having a bit of fun before letting rip! What amazed me was that each one was so totally different in every way. I imagine they must still exist somewhere but I know Michael doesn't have them. There was one with a fabulous slow stuttering phrase at the beginning and another with a lick I use whenever I get the chance .. they were all great and the choice was near impossible.

Engineer extraordinaire Gregg Jackman should get some of the credit for this wonderful solo because he put it together ! Ollie played around six very different solos one after another in the control room at Morgan studios that afternoon . It was so difficult to choose one because they were all brilliant .. so we chose our favourite bits from I think three of the takes and Gregg stitched them together rather well ! I thought that ( drummer ) Barry Morgan was fabulous on this track ... very nice guy too and such a professional .

On this track you hear Michael on bass and rhythm guitar ( his SG Custom ! ) , Frank Ricotti played percussion and did the horn arrangement and Barry Morgan played the drums with a little minimal request from us which he picked up in an instant .. at the time we were listening to a lot to The Rascals Island of Real ( Buzz Feiten being another favourite guitarist of ours ) and we liked what Dino Danelli was doing with his drumming .. so the funky drum fills are sort of how we tried to describe Dino to Barry ... Ollie also plays on the track Patience Cousin. He sings along with his solo on that one .. through a Leslie type effect .. along with his session fee Michael wrote ( at Ollie's request ) to Nigel Thomas urging him to return Ollie's white SG to him ...shame on that man ! Imagine ..he didn't even possess a guitar at this time .