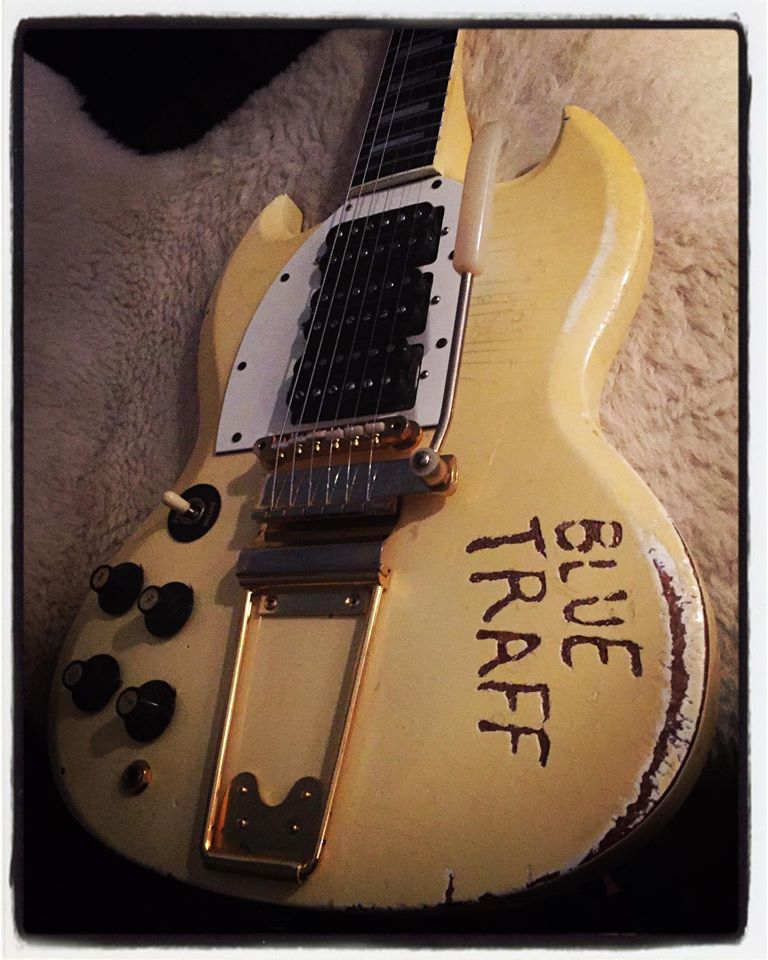 Ollie's 1967 Gibson SG Custom guitar was originally purchased it [in perfect condition!] from Semer's in Charing Cross Road, London in 1969, by manager Laurie Boast - using Ollie's white Fender Telecaster, which Laurie had purchased for him a year before - as part exchange. It was converted for left-hand playing by Phillip ['Barnabas'] Swain, one of Patto's roadies.

This involved not only switching the strings, but also relocating the controls. There was also a small non-original integral pick-guard, pick-up surround for some reason.

"Ollie bought the guitar and played it of course all the time and it took a while in the schedule to fit in a conversion. He said just move them over to there [specific point] as they are, in a very matter of fact way, he had a good eye as a artist designer and knew what he wanted.

"I moved the controls without mirroring them as Ollie was used to them like that, and he chose the position exactly because the tremolo arm hung from the top now and could dangle loosely in his hand whilst playing and reach the controls easily. Also the wood block I fitted in the old cavity I remember matching the wood for balance, and I did the body reshaping."

Back in 1971, I saw Patto on the French TV show Pop Deux. Although just a teenager, I was blown away by the band. I already loved bands like Black Sabbath, Deep Purple, Ten Years After, Mountain, Grand Funk and The James Gang (also discovered on the same program). The sound and amazing class of Patto really knocked me out.

I worked for two years during my school holidays to save money to buy a Gibson SG Custom like Ollie Halsall's. By the time I had enough money, I called the main dealer in the South of France to order my SG but, by then, this model - being a Type 2 - was discontinued: Only the new (butt-ugly) Type 3 was available. I was so disappointed but, with my money, I ordered a white Fender Stratocaster, like Hendrix's 'Woodstock' Strat. [Still got it!] Anyway, this was the beginning of my search for Ollie's SG.

I managed to get in touch with the man himself back in 1986 and I asked him if he still had 'Blue Traff'. His reply was "As for the white guitar I used to play, well this was confiscated by Nigel Thomas, an ex manager and naughty boy! I think he sold it. There was a rumour that George Harrison has it. I worked with him a while back but I forgot to ask him."

I started chasing both the Nigel Thomas and George Harrison links. Nigel Thomas definitely had confiscated the guitar and sold it, but I asked one guitar dealer who had access to all of Harrison's guitars and he guaranteed that this left-handed SG was not part of George's collection. I also asked a relative of George and got the same reply. Best of all, I did meet George Harrison himself and he also told me that he never owned Blue Traff.

Around the end of 2006, I got in touch with John Engel the author of Uncommon Sound, a book exclusively dedicated to left-handed guitar players. In this book Martin Jenner is interviewed and claims that he bought Ollie's SG  from Orange Music, in London - who must have acquired it after Boxer's manager, Nigel Thomas, took all the band's gear against debts.

[It is exquisitely ironic that, in a 1974 New Musical Express interview, Ollie offered the advice: "Don't go to Orange Music for your guitars." [Martin Jenner, another 'lefty' (who is also, sadly, no longer with us), was a noted session guitarist and sideman for, amongst others, Barbara Dickson, Cliff Richard and The Everly Brothers. He famously had a 4 x pick-up [!] Fender Telecaster and, earlier a John Birch 3 x pick-up SG Custom. He modified the vibrola tremelo on this to allow a space between it and the bridge, where he would pull the strings to change the pitch of open strings and harmonics - Ed.]

Apart from some apparent discrepancies with dates and details, it is quite possible that Martin owned the guitar at some stage but in any event, he sold it before moving to Perth, Australia.

Over the years I've put the word out in most guitar stores in London and many workshops as well as putting an advert in music magazines and posted messages on the net. If Ollie's SG turned up somewhere it would be easy to identify.

The perseverance of my search eventually paid out. In October 2006 a customer brought an old SG Custom to Phillipe Dubreuille workshop (a well know guitar maker) for repair. Shortly after I visited his workshop and saw this SG Custom hanging on a peg ready for restoration.

The SG was already stripped down to the wood and most of the hardware was in a cardboard box. The owner new nothing about Ollie Halsall and he was only interested in getting the guitar restored. His idea was to turn it back to right-handed and sell it

After really close inspection I saw that the upper horn had been made shorter with the edge of the horn slightly trimmed, but the real give away was the extra screw holes for the unusual pickguard. Other details showed that a different bridge had been fitted at a slant for left hand playing and the nut was also re-cut for the same reason.

What used to be the control cavity had been filled in with wood and a there was another one in the opposite side of the body. The holes for the controls, switch and jack were already there, but not quite a mirror image of the right hand holes. The lack of volute and 'Made in USA' stamp indicated the correct year for the guitar. This had to be Ollie's guitar. I made a very good offer to the owner and my offer was accepted.

Luckily most of the hardware and electrics were included, I had to purchase an original bridge but not much else. Ollie's original guard (kind of upside-down telecaster guard) was missing, so a new one has been made using the template of the holes already there. I had the SG refinished with the correct paint and with an aged finish and restored to its former glory - including dings and knocks and the famous Blue Traff words.

The pick-up are wired as follows:

The funny thing is that plugged in the guitar has all the right tones that you hear on Hold Your Fire. I did a parallel test with most songs on the album and it is all there, rhythm and lead, just the same - all in one guitar. I understand why this was the perfect guitar for Ollie. 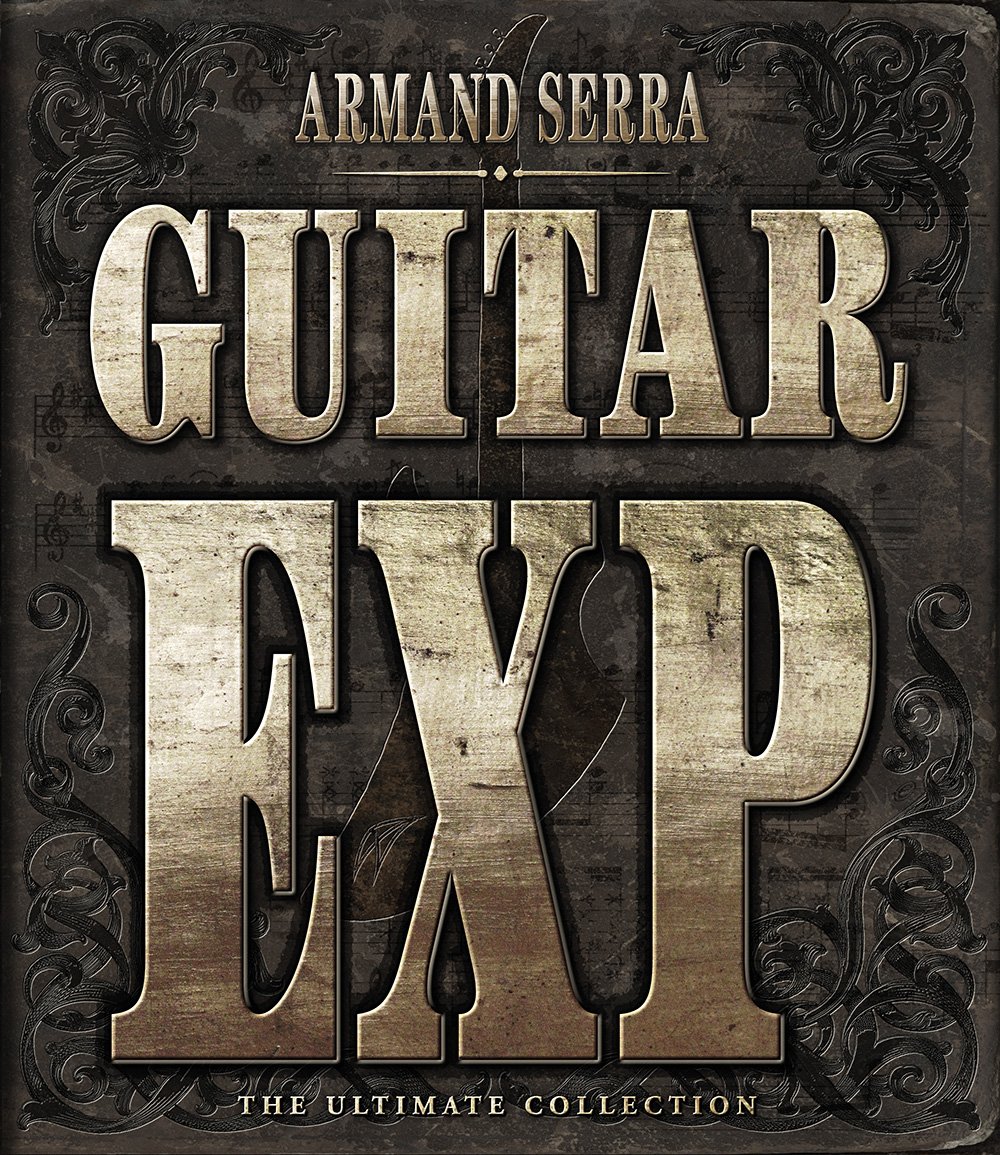 There are 3 series of this particular model: Type1 - 1961-1965, Type 2- 1966-1972 and Type 3 - 1972 onwards. This was a Type 2 - considered inferior to the Type 1 (but not as inferior as the Type 3!). This misconception is founded on the introduction of a one-piece 'bat-wing' scratchplate/pick-up surround which doesn't present the pick-ups exactly parallel to the strings - neither, however, do the individual units of the Series 1 version. 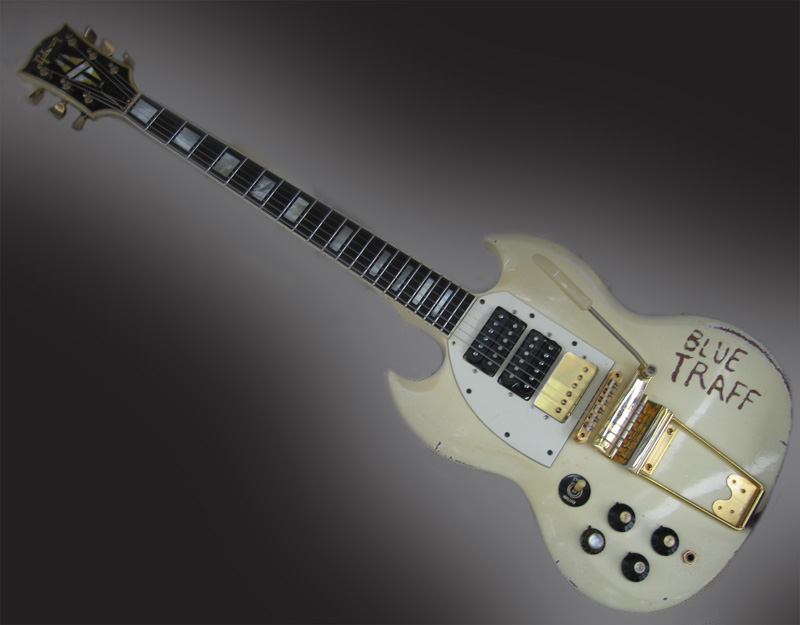 Here's what Ollie's one would have looked like around 1973. Note the gold bridge-pick-up cover. Ollie removed the other two. This is a bit odd because you would normally remove the bridge pick-up cover to slightly increase the output. But no, he did everything the 'wrong' way. By the Boxer period., it had come off as well.[as in the eother photos]

Ollie and The Blue Traffs

"It's music to laugh at," said Ollie Halsall, unbuttoning his long leather trenchcoat and removing his green Panzer hat with the flaps as he sat down in the restaurant. "It made me laugh, anyway; I went in there to have a loon."

For sure, that's what Patto is about. Every gig's a larf, innit? But Halsall isn't talking of Patto. He's referring to the album he made at London's Command Studios last week, him and a few pals. Ollie and The Blue Traffs, they're called.

What? Well, he explained, a traff is a fart backwards in spelling, and it's also the moment when you ignite a fart*. "The album is music to traff to", he says matter-of-factly. Oh, I see. 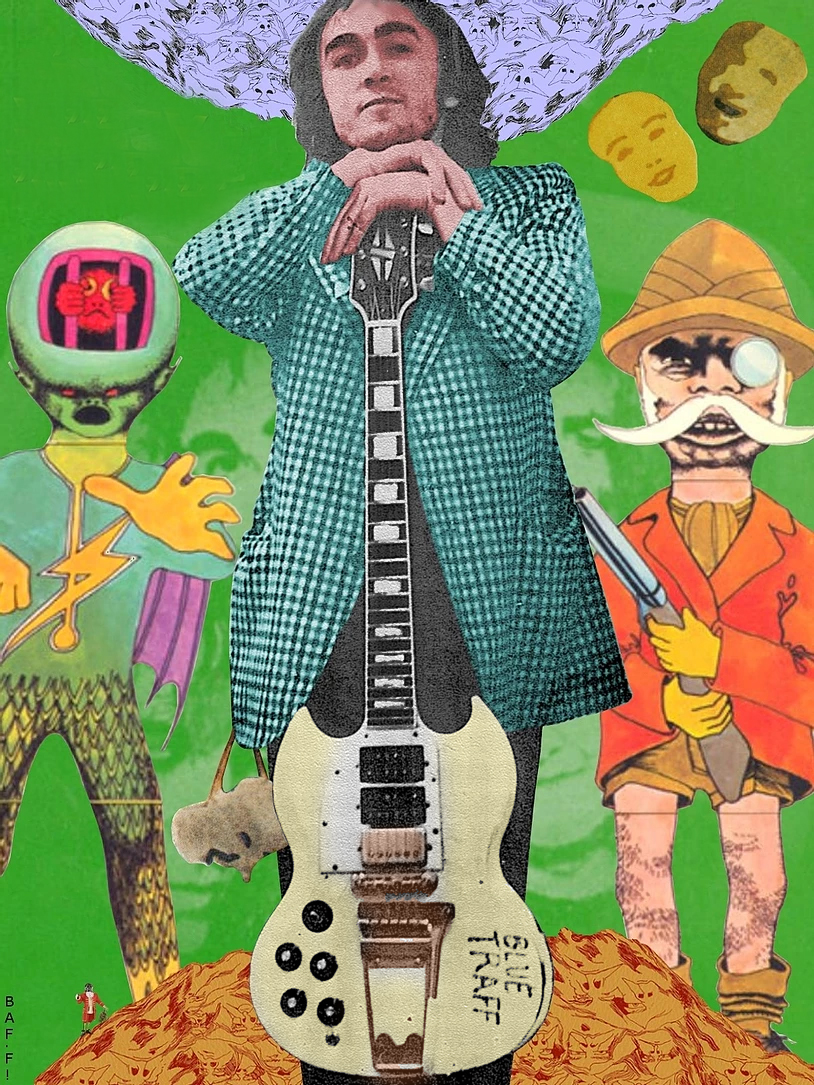 The practice of igniting flatulent emissions was alarmingly common amongst jazz and rock musicians of the time. One of the erliest references is documented by George Melly in his book Owning Up.

Correspondent, Alan Charles, points out that Georgie Fames backing band, The Blue Flames were so named because of their antics with a cigarette lighter in the back of the van.

So obsessed was Mr Halsall with this latest venture, however, that he very crudely embossed the words 'Blue Traff' on his [only] guitar [with a penknife - John Halsey].

This, naturally, remained a permanent feature of the guitar for the remainder of his time with Patto and was still there throughout his career with Tempest [1973|4] and Boxer in 1975|6.

The guitar was then confiscated by Boxer's manager, Nigel Thomas, against debts and has never been heard of since - until now. 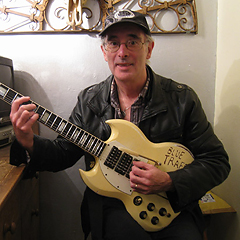 "I took the guitar out of the case and said to Rick 'Let see if you know what this is'. As soon as he saw it it says "Ollie Halsall!". Then he proceeded to play Loud Green Song and Singing the Blues on Reds and more bits and pieces, including a short burst of an Ollie-style solo." 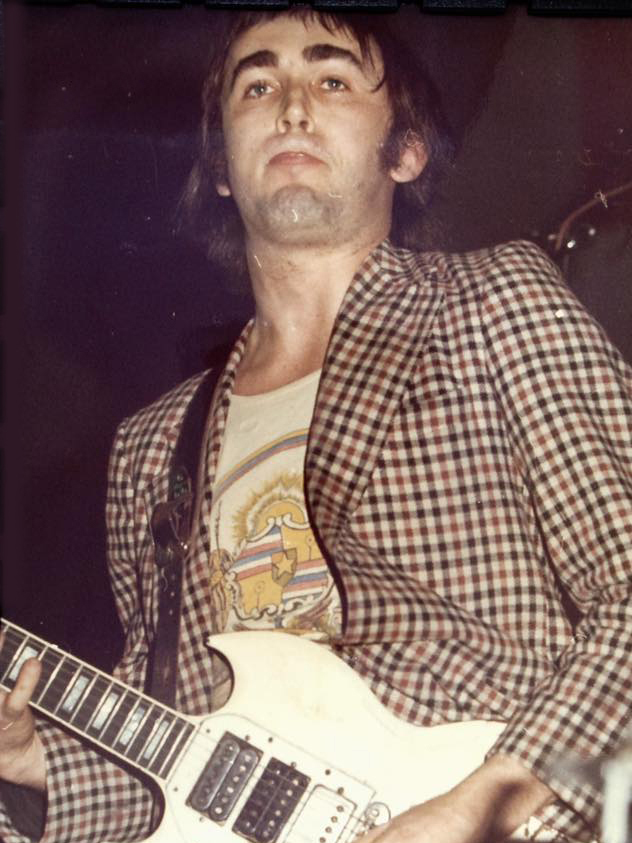 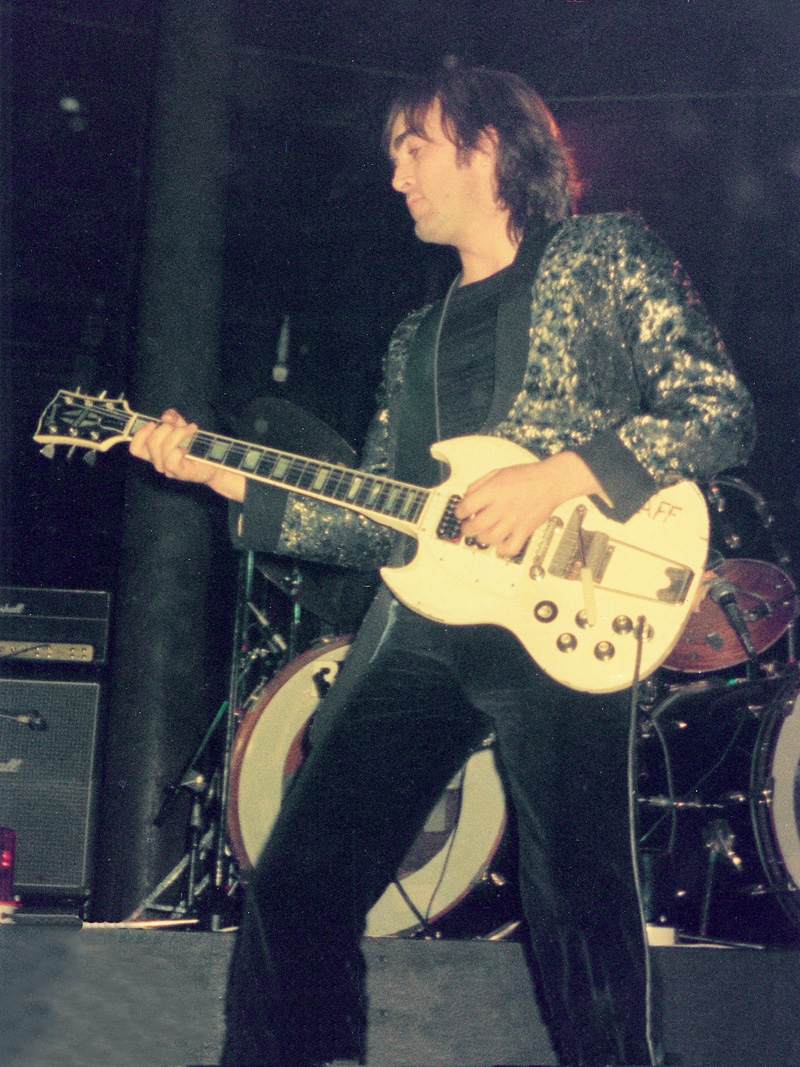 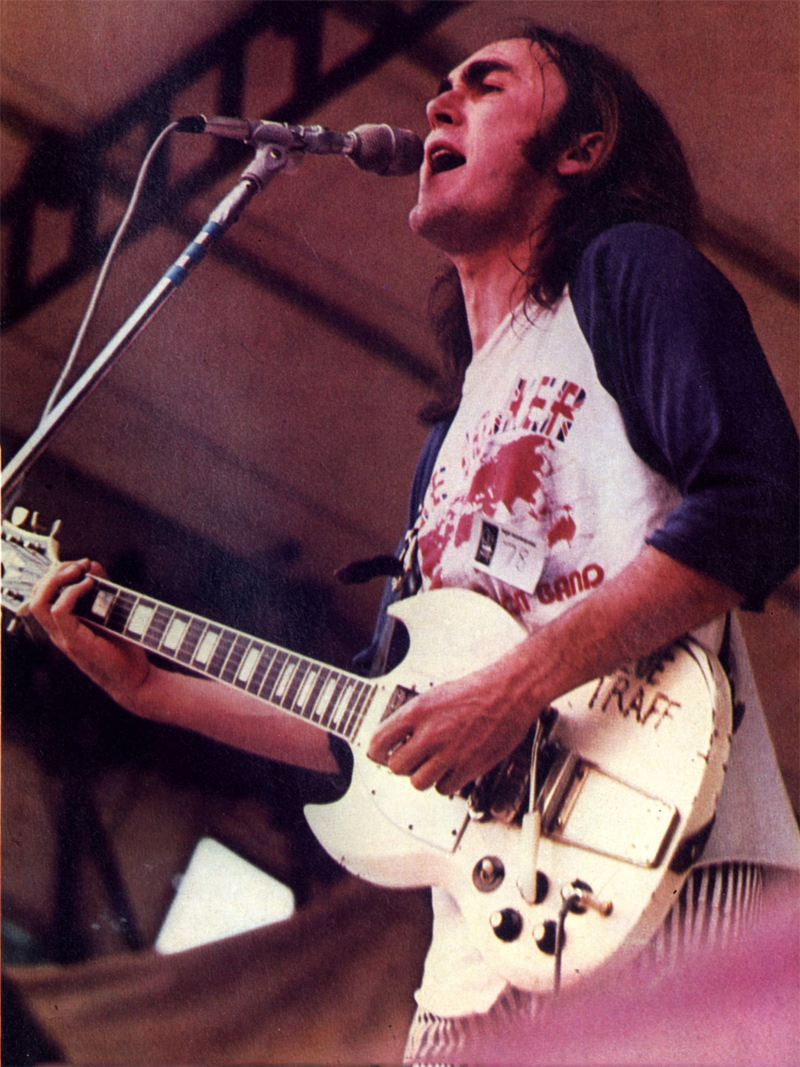 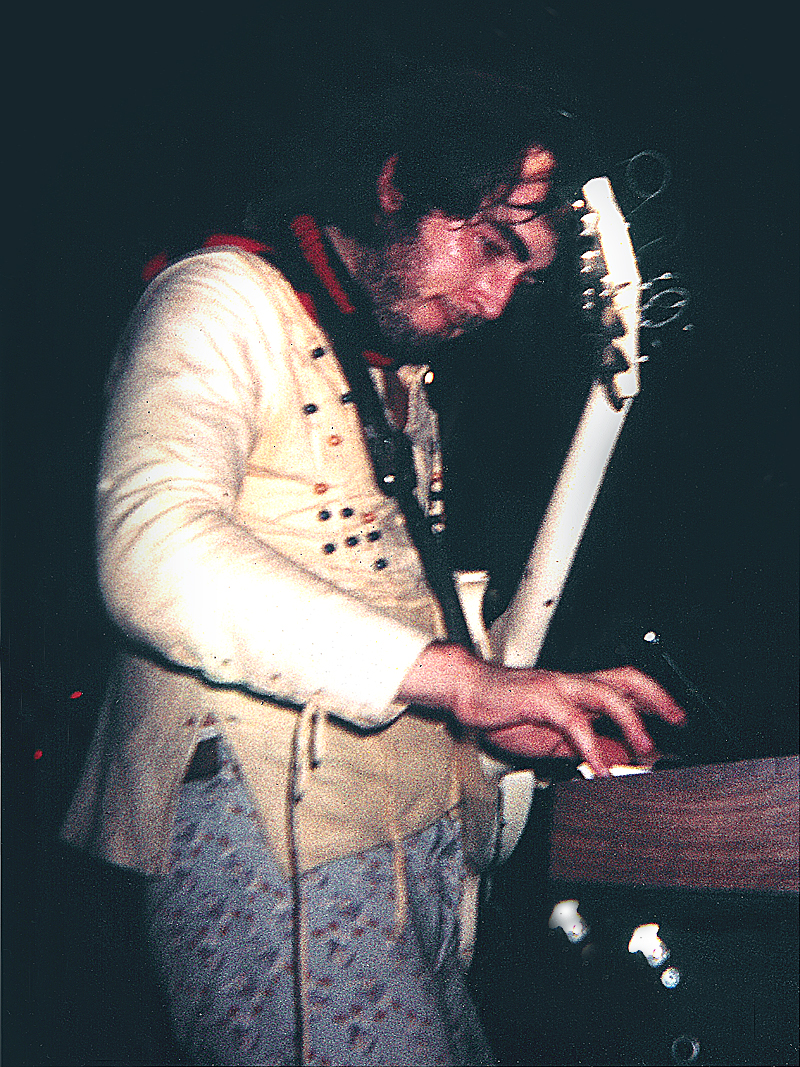 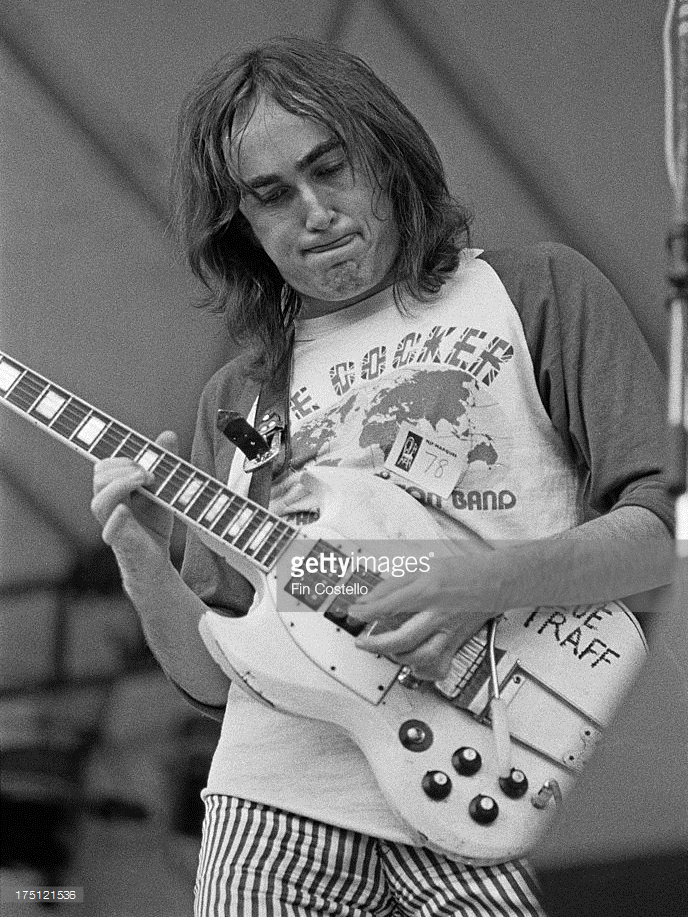 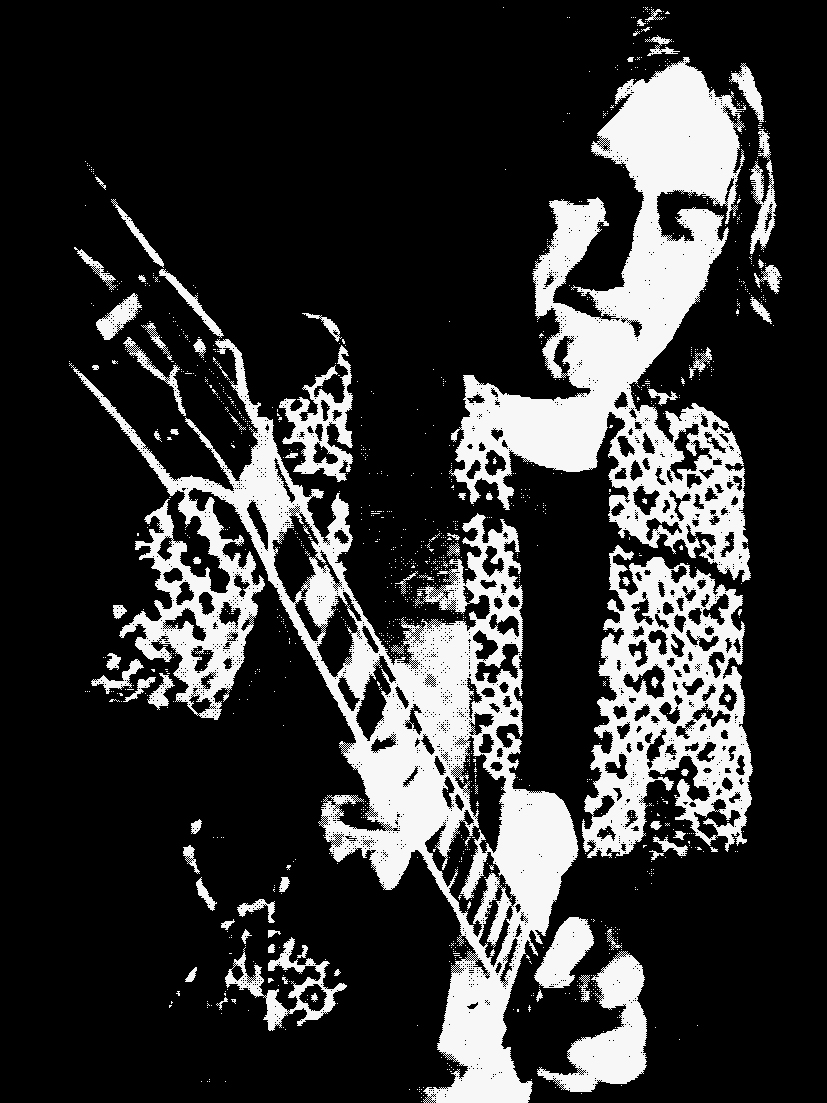