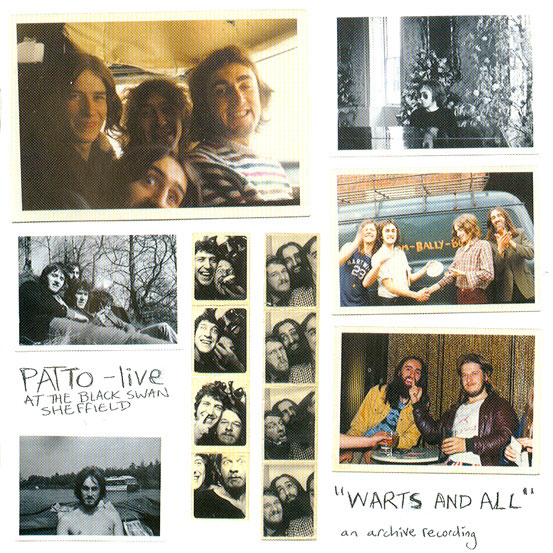 I've had the album in this finished state for ages - and, of course, I've had the original cassette for nearly 31 years! I've had many attempts at putting pen to paper, torn them up, and started again. Because I was there from Timebox to Patto for six years and remember everything, it's hard to know what to put in and what to leave out!

With us at this time were the two roadies - Phillip ['Barnabas'] Swain and John Taylor (nicknamed Johanne). Johanne’s name changed according to the country we were playing in at the time i.e. Johanne Schneider (Germany), Jan Clearmarker (Holland) etc. Anyway, the name 'Johanne' stuck and I believe he is still called Johanne today.

When working, our motto was to act ‘top-of-the-bill’, so when supporting a band bigger than ourselves (and that was more often than not) this is what we did and therefore became a hard act to follow; making a big entrance, playing, our socks of, mixed with comedy, Ollie's incredible guitar playing finishing with a stupendous number that made peoples jaws drop open, a swift exit after a 'thank you' bow, a return for more applause and then leave the stage - follow that you bastards!

In the early days we played seven nights a week - clubs, American airbases, and more clubs - grabbing a rehearsal when we could to learn new material; but it was all other people's material.

One day when moving our equipment from the Scotch Of St. James to Hatchetts for an afternoon rehearsal I suggested writing our own material, Mike had written a few lyrics in his Norfolk band days and so we started.

Our first ever song was called 'Froogly Boogly' - I can hear it now - it was bloody awful! Others followed over the next few weeks including 'Oobladee, Ooblada' - a phrase used by Jimmy Scott, an African conga player who worked with Georgie Fame. When stuck for something to say (which was quite often) he would say 'Oobladee, Ooblada - life goes on'. Obviously Paul Mac had the same idea, but we were first, sorry, second after Jimmy Scott.

It was at this time we started laying at the Black Swan in Sheffield - an old haunt of Joe Cocker’s - run by landlord Terry and his wife. We would do the occasional Sunday night with a couple of months between gigs.

As time went by the Sheffield audience saw all the transitions in music, madness, instrument changes and personnel. Chris Holmes (Prof.) who played organ left and we changed the name from 'Timebox' to 'Patto'. Some gigs at the Black Swan would be straight down the line music nights and some would be crazy.

We would work out our repertoire in the van - comedy routines, harmony numbers, poetry readings instead of solo's etc. One night we just sat on chairs on the front of the stage and answered questions! We would perform old songs like 'Hands, Knees and Boompsadaisy' and 'Hi Ho', or hold a twist competition. There was even a night when an old boy who busked in the city centre, whistling, got up and did a few numbers with us - the crowds loved it all.

One night I lost my temper with Ollie and we had a shout-up in the dressing room. He had on a Boy Scouts uniform with a spider’s web drawn on his face and is hair Brylcreemed to a point, and I was dressed in lederhosen and silk waistcoat, with a blue face and silver nose! Clive intervened, calming the situation and he was in the nude, just as he'd been on stage!

We played our last ever gig at the Swan on 30th April 1973. The recording of this gig was made in 1971 while we were completing our second album 'Hold Your Fire'. We were in and out of the studio in Basin Street with Muff trying, as always, to get as much done as quickly and cheaply as possible.

On this night Mike had a bad throat and was not in the best of moods. He managed to do the whole gig but there are a lot of croaky vocals and also tunes we hadn't performed for ages, but we put them in for the sake of his voice, therefore some of them fall to pieces! There are also more songs sung by Ollie than there would normally have been.

This recording was made by myself with a little cassette player with a built-in mike that was put on the side of the stage and it is far from studio-quality. Thankfully the vibe of the evening comes across and Ollie's incredible guitar playing was at its height.

Anyway, here I am rambling on. I hope you enjoy it - I feel it's a little bit of history you can hold in your hand - 'Warts and All'.

Warts and All review

You, You Point Your Finger
One of Mike’s 'Them And Us' lyrics. It's actually about someone Mike knew and is more of a 'You and Me' lyric.

It's very harsh, so I won't spill the beans and tell who it is.

Money Bag
We were very into this kind of broken up, weird time signature, free music at this time Ollie, Clive and I would put something like this together, give it to Mike and say, 'Right, put a lyric to it and sing it'

Let It Rock
This is one of the tunes we fitted into this gig due to Mikes throat problem.

It's sung by Ollie and I think the guitar solo at the end is a good enough reason in itself to by this CD.

Magic Door
At this time Ollie was still playing the Vibes, and on this number doubles vibes and guitar.

The Vibes eventually went, they used to get regularly tipped over by Ollie's foot at the end of the night in the last number and would spectacularly fall to pieces.

They were on wheels and unfortunately fell off the stage one night and were unrepairable, fine if you're Pete Townsend, just buy another set, but we were a little short of cash at that time - well for six years, to tell the truth!

Government Man
A number brought back for the night because Mike felt it easy on the vocal cords, the request bit is bollocks. It shows that we hadn't played it for ages.

Air Raid Shelter
[actually, How's Your Fater]
Music and Lyrics by Ollie, usually sung by Mike, but that night sung by Ollie to give Mike a break. God knows what the lyric is all about.

Tell Mc Where You've Been
We called it the I0 verses. It was different every night. There were so many verses and so many lyrics, Mike couldn't emember them and would make them up as he went along.

San Antone
Sung by Ollie - the one and only time I can remember this happening, and he knew the words!

Sitting Back Easy
Another number brought back for the night. It falls lo pieces in the middle, sorry about that, viewers, but it's much too late lo do anything about it now.

Big Hunk o' Love
Heads down and charge. It's the last number" This was the last straw for Mikes voice, he gave it all he had, what a trooper! He couldn't speak for days after this gig.

Warts & All
Patto live at The Black Swan
Sheffield 1972

Archive recording by Patto drummer John 'Admiral' Halsey. The only Patto 'in concert' recording available
"The solo on Let It Rock alone is worth the purchase price."

You, You Point Your Finger

Tell Me Where You've Been

*Bonus track not on original CD

These recordings are of historical interest. Whilst every effort has been made to enhance the sound, the quality reflects the limitations of the source tape.

The original CD version is out of print, but you can purchase the album as an MP3 DOWNLOAD here for just £4.99