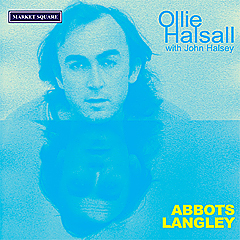 The planned group never materialised and Ollie joined Kevin Ayers' band, with whom he spent most of the next 12 years, until his untimely death in 1992.

This album is a snapshot of a particular period in the life of a somewhat eccentric but extraordinarily talented musician.

The material, which includes nine Halsall originals, dates from a 1980 colaboration with drummer John Halsey and is completed by some very unusual extra recordings.

The planned group never materialised and Ollie joined Kevin Ayers' band, with whom he spent most of the next 12 years, until his untimely death in 1992.

This album is a snapshot of a particular period in the life of a somewhat eccentric but extraordinarily talented musician.

The material, which includes nine Halsall originals, dates from a 1980 colaboration with drummer John Halsey and is completed by some very unusual extra recordings.

Monkey On My Back

This One’s For Me

Time Is By My Side

We Want Out (instrumental version)

These recordings are of historical interest. Whilst every effort has been made to digitally enhance the sound, the quality reflects the limitations of the source tape

Marietta's lovely pizzas
Heat and eat a them for your tea

Marietta's pizzas
The mother of all pizzas! 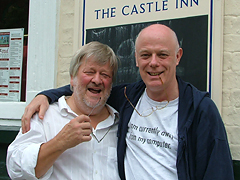 "So, what are you doing?" Ollie asked me. "Not a lot." "Let's put a 3-piece together and do some gigs." So over to Abbots Langley I go. The house was an utter shit-hole! He couldn't pay the mortgage or rates, the electricity had been cut off as well as the gas. He couldn't drive and had no phone. He had no money and was stealing food from shops and milk off people's door steps. All he had was a borrowed guitar and a battery-operated Pignose amplifier.

We retired to the pub to talk tactics. He was barred from the two others in the village - one for fighting and the other for urinating against the bar where he stood drinking his beer.

The one remaining establishment was run by an old lady with thick khaki stockings, slippers and a housecoat. Even though we were the only customers, she didn't seem very happy to see Ollie.

We decided to get a bass player to help out with the vocals. There were a couple of players involved, but none that stayed. We even advertised in The Melody Maker - 'Ollie and John from Patto want bass player/vocalist.' It brought no response.

I did quite a lot of work with John Rowlands, the engineer from The Barge studios in Maida Vale.

He knew people who gave advertising briefs to writers of jingles. I put it to him that, if any assignments came our way, Ollie and I would split the profits with him. The first one we were offered was for Marietta's Pizzas. They wrote and sent us the lyrics and we set them to music. (Included here as track links.) We recorded them in The Barge studios. They were never used, so we never got paid.

Vivian Stanshall got us to do some tracks with musical director Pete Moss for the album Teddy Boys Don't Knit.

I got my session fees - about £700 - through the post. Next day, I drove over to Ollie's, thinking "At last, he can buy a guitar" because everything he was doing, he had to borrow one.

I was thinking that he could have the electricity put back on, or buy some coal, or even food! But, no: "Hi J. Yeah, got my money. Come and see." I went into the house and, all around the walls, were pinned these giant sheets of paper. "I'm gonna build an ocean-going yacht. Sail around the world. I'll build it in the back garden and have it lifted over the house by one of those massive cranes on the back of a lorry." The plans cost £700.

One day, he said to me "I can't understand why I don't get any work - I'm not a bad player." I had to explain to him that, without a guitar, driving licence or telephone, it would be a little uphill. The fact that he hadn't paid the mortgage or rates for a year, and was scared to draw the curtains or answer the door, was not exactly conducive to modern day living.

Another thing we did was the Miniatures album by keyboard player Morgan Fisher (who had been with us in John Otway's band). This comprised just one-minute tracks - loads of 'em. It was recorded in his flat in Fulham. Ollie and I put together this bizarre crooning piece with staccato guitar middle and talking through it and Morgan counting the seconds down backwards from 60. [Included here to open the album.]

Bill Lovelady was an old school-friend of Ollie's and was in one of his early bands, perhaps The Music Students. Bill had a bit of a hit in Europe with Reggae For It Now. It became a big hit in Sweden and he was asked to do a tour for a couple of weeks. He got Ollie to play (borrowed) guitar.

"See you in a couple of weeks" he said. Off he went from the house in Abbots Langley . . . and he never came back.

Do you remember when you could go to the cinema and watch a movie and sit in your seat and wait for the next showing? In 1975 when I was 6 dad made me sit through Jaws twice! We then came home and he painted the huge jaws on our double white gates. The mouth was wide open with the gate handle right in the middle between its massive teeth. When I came home from school I had to wait for someone to let me in as I was too scared to put my hand in the sharks mouth to open the gate.