I worked at the Butlins holiday camp in Filey Bay, East Yorkshire, for the whole of the 1966 summer season. I was the cinema projectionist andworked in the daytime. In the evening time I would go and watch [The] Timebox play. That's when I first met Ollie

I was always following him around. I wanted to be a 'musician' just like him. I had an old acoustic guitar at the time and was just learning how to play. Ollie would sometimes tune it for me.

I remember him talking about the new Beatles 'LP' Revolver . He'd talk about the 'duality' of the title and the progression of their music. He was certainly a Beatles fan.'

I didn't follow the music path, I didn't have that gift. I went on to work in the film industry for some ' 30 years as a VFX cameraman' working on some major film productions.

I did meet him once more. I had moved from lancashire to Beaconsfield ' and one night in 1971 I was at The Nags Head in High Wycombe. He and Clive [Griffiths] were in the band that evening (Patto, I guess ). It was Clive who spotted me. We talked a little about Filey Bay and that was the last time I saw him.

I only learned of Ollie's death a few weeks ago. It was a shock to learn he died so young. So pleased to have been of help for Ollie was a soul you never forget." 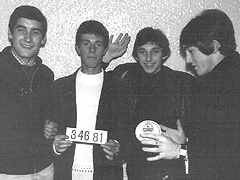