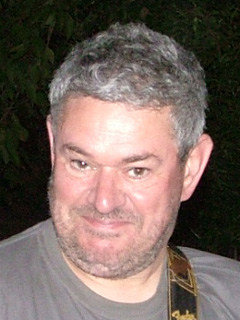 Out of the blue, I get sent a recording of Rocks, Mike Patto's short-lived but excellent [and probably last] band Rocks, featuring John Halsey, Fred Gandy [bass] and one Bernie Holland on guitar. The very same day I receive news of the veritable Holy Grail - Patto's legendary 1971 performance on the French TV show Pop Deux. This features a certain Bernie Holland - but this time on bass, in place of an indisposed Clive Griffiths.

Google pays scant attention to Bernie's distinguished career but, amazingly, gives me his phone number, via a directory of guitar teachers!

So, after exchanging formalities, I drive to the leafy suburbs of North-West London to meet the man himself.

I am greeted by the charming Cindy and shown into a cosy living room adorned by paintings of trains. These are all Bernie's work and very good they are too. It transpires that Mr Holland is a train-freak of serious proportions and a considerable authority to boot. I am later to see a vast collection of photographic slides in great demand by the railway enthusiast world.

"So, spill the beans then" says Bernie "What's you interest in Ollie?". I explain about the Archive and my first encounters with The Pattos back in the early 70's and Bernie immediately begins to regale me with tales:

"During 1970 - 1973 I was living in a flat in Hendon. My younger brother Chris had taken some acid and dropped out of his degree course at Kings College and was doing a bit of roadie-ing for Patto as Phillip ['Barnabas'] Swain had had enough and had left to live in Cornwall. As Chris was of generous build physically, Patto bestowed upon him the nickname 'Large' which Chris hated, but had to live with.

"I was in a band called Jody Grind and we used to see Patto at The Marquee Club a lot. I struck up an instant friendship with them, especially with Ollie - I think we had a lot in common. I went to a lot of their gigs because he was my favourite guitarist, actually I shouldn't say ‘favourite’, rather that Ollie was the only guitarist worth going out to see. I say this because at this time everyone seemed to be trying to copy Clapton or Hendrix and hearing Ollie was great relief from this boredom.

"I seemed to hit it off with Ollie especially. Around 1969 when I was playing with Long John Baldry's band Bluesology, I discovered a very potent cough mixture called Dymerol - which, if taken in large doses could have the potential to alter one’s consciousness.

"Later on in 1971 when I was working with Patto, I related to Ollie a story about how, when on tour with Baldry, I took almost a whole bottle of the stuff and dug a huge hole at the back of the hotel car park. The next morning, someone’s car was seen poking out from it.

"In 1971, Patto’s bass player Clive Griffiths became ill with pleurisy and Patto asked me to do a tour of Europe playing bass. As I was familiar with their material I became the fifth member of the band for a while and we had some raving times together.

"Ollie and I shared an understanding of the innate absurdity of the human condition and, being primarily a guitarist also capable of a turn of speed, I had a good idea of how to play bass for his amazing guitar solos.

"In 'Pattoland' nothing was off limits and everything was up front and in your face - if anyone didn’t like it then they would have to deal with it themselves, not like today where you can’t say anything without some twat taking offence.

"The expression 'You're sacked' became a catchphrase for any minor misdemeanour, such as being last to finish breakfast. Even as an 'outsider', I managed to 'sack' Patto himself on at least two occasions.

"When Mike Patto died, in 1979, Ollie called me up and said "Berns [which he always called me], are you going to the funeral?" Since Ollie didn't drive this was a thinly disguised request for a lift.

"At the graveside, on that dismal Dickensian Winter's afternoon, we placed a hastily written sign bearing the ironic legend 'You're sacked!"

"It was a fantastic experience living and playing with Patto and striking up a great friendship with a really great guitarist because there were very few contemporary guitarists that impressed me at that time.

"Patto's quirky time signature changes and anarchic lyrics became an enormous influence for many musicians at the time. The musical arrangements were, of course, very challenging - even to the most able players.

"The trouble was that Ollie thought that, if he could do something, then anybody else should be able to. Saxophonist Dave Brooks was in the band for a short time and, at a rehearsal, Ollie became increasingly annoyed with him for not instantly understanding the fine details of some absurd new musical arrangement. Eventually, Dave packed up his sax and stormed out moaning 'I'm a musician - not a f***ing mathematician!'

"At one point I even formed a band called Bonno - which was my nickname from the Bluesology days. Baldry would reduce everyone's name to something-o. So bassist Freddy Gandy became Froddo and I was Bonno. Of course it also sounded like a take on Patto which, to be honest, it was. They say that imitation is the sincerest form of flattery but I was never really sure whether Mike really appreciated the compliment.

"Fortunately, Griff’s hospital treatment was successful and when we got back to England after the European tour, he reclaimed his rightful place as bass player with the band - so I thanked the guys for their hospitality while I been deputising for Griff and signalled my intention to move on and let the guys get on with it. But Ollie would have none of it and he insisted that I stay in the band and play guitar alongside him.

Even so, I maintained a great friendship with Ollie and when I bought this house, he came over and visited me a few times – we had some raving times especially when we set huge bonfires in the garden.

"On one occasion we burnt a pile of furniture and declared it a piece of conceptual art. I reciprocated by visiting Ollie at his house in Abbots Langley, near St Albans – at that time he had discovered the Sex Pistols – I was surprised at this because I thought they were crap but Ollie found their recordings a good background noise against which he could smash his house up, which he did during one of my visits – he offered me a sledge hammer so I could join in but I said I would prefer to roll myself a spliff and sit back as an observer.

"I remember he had painted the gates to his house with a huge image of the killer shark from the film ‘Jaws’ which had been popular at the time - he was a very good artist with a tremendous imagination.

"The last time I saw Ollie was around 1980 in a pub in South London. I was playing with a jazz trio and, in the interval, this unshaven hairy creature in a long black leather Gestapo raincoat ambles over and says 'ello, Berns'. I insisted that he played my guitar in the next set but he wouldn't "'Nah, I can' play over changes" [?]. "What about a 12-bar blues the" I suggest. "Nah, I don't do that anymore' "

There are further tales of Patto insanity: Absurd and somewhat foolhardy pursuits like 'waddling' [running down mountains in The Black Forest] and the legendary Regent's Park cricket matches - for which Berns had even made a fully functional scoreboard!

As well as teaching, Bernie still does the occasional gig. He has his own recording studio and treats me to some wonderful recordings such as a self-composed classical guitar duet he has synthesised on his computer, and a perfect recreation of the organ part to The Who's Won't Get Fooled Again - painstakingly reproduced note-for-note, just so they could play the song it at a private party.

Finally, photographs are suggested and my host immediately goes into characer, posing aloft his self-built tree house in the back garden in true Patto-esque guitar-hero style.

If you live in North-West London and want to play the guitar, I can recommend a very good tutor . . . 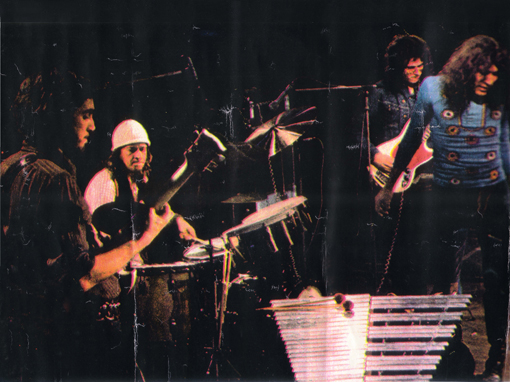 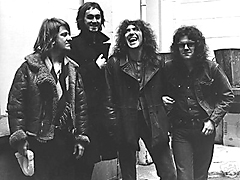 Bernie was the first to create the Da-oo! yodel that greeted the appearance of Patto on stage (or off, for that matter)