Roy Weard worked as the the sound technician on Kevin and Ollie's final European tour in 1992 and earlier for John Cale when Ollie was in the band. Here are some of his photos and recollections.

Now, we should have no reason to doubt the accuracy of this extraordinary story. The incident described may not, in fact, be particularly unorthodox for someone who learned to play the vibraphone at the age of 14 on a paper cut-out of a piano keyboard or who, reputedly, spent his share of Patto's recording advance on a Persian carpet!

I was monitor engineer on the 1985 John Cale European tour but, because I play guitar, I was also asked to do the guitar roadie job during the show and change strings and tune up etc. Ollie had a spare guitar on that tour which actually belonged to the bassist, Dave Young. This was an immaculate white Fender Stratocaster which Dave hated Ollie even touching let alone playing because of Ollie's casual way with these things.

On the first gig at the Amsterdam Paradiso, Ollie broke a B string on his bruised and battered cherry red Gibson and resorted to the white Strat. Dave visibly winced.

I retrieved Ollie's guitar from the stage and my first surprise was that the strings were absolutely filthy and rusty and I thought I would ask if I could change them all after the show. I changed the string, tuned it, and returned it to the stage. Ollie leaned over to me. "Is it in tune?," he asked. When I said that it was he seemed surprised, as if he had never had a guitar tech before.

After the show Ollie came over as I was packing down and thanked me for dealing with the broken string. No-one had told him that I would. "What did you do with the string?" "I changed it,." I said. “Oh have I got some spares then?," he asked "Yes," I said "eight sets."."Where's the broken one then?,” he asked. "It's over there, lying on the floor beside the monitor board," I said, puzzled.

He went over and found the two bits of broken guitar string wound them up and put them in his pocket, smiled and explained, "I tie knots in 'em and use them again." When I looked at his guitar I saw that this was exactly what he did. The strings were old and crusty and all of them, with the exception of the one that I had changed, had knots in them.

He broke very few other strings on that tour, despite wiping the guitar on the mike stand, the speaker cabinet and anything else he could find. They were replaced with new ones by me, because I was not going to mess about tying knots during the show when I was supposed to be doing the monitors.

The strings I was given for him were Ernie Ball lite gauge, but he would use anything if it was not too heavy. At the end of the tour he pocketed at least five sets and said, "These will last me for years." He had that same guitar on the Last Kevin Ayers tour and I was totally amazed to see that it still had knotted broken strings. I was even more amazed when he allowed Dave Thomas - a guitar tech who had done three tours with Steve Harley - to change the strings before the final 1992 Shaw Theatre shows.

The Artificial Intelligence tour was the most erratic and unpredictable I have ever done. The personnel were widely dissimilar and the music veered from the sublime to the raucous. John was in "over the top" mode. Overweight and overindulgent in behaviour, drink and drugs. Ollie, on the other hand, was quiet and composed. He got a bit drunk and he did a bit of coke but he was never really a problem.

On one occasion when the band arrived at a hotel in
Holland John grabbed Ollie's guitar from the back af the
minibus and walked over to a river that was racing along
beside the car park.

"I hate this fucking guitar!", he shouted and lifted
it over his head to throw it in. Ollie. a full head shorter than John hopped around him frantically trying to retrieve it. Phil, the tour manager and front of house engineer, saved the situation by rescuing the instrument from John. Ollie painted this incident and that canvas is, apparently, somewhere in Spain)

The Way Too Weard 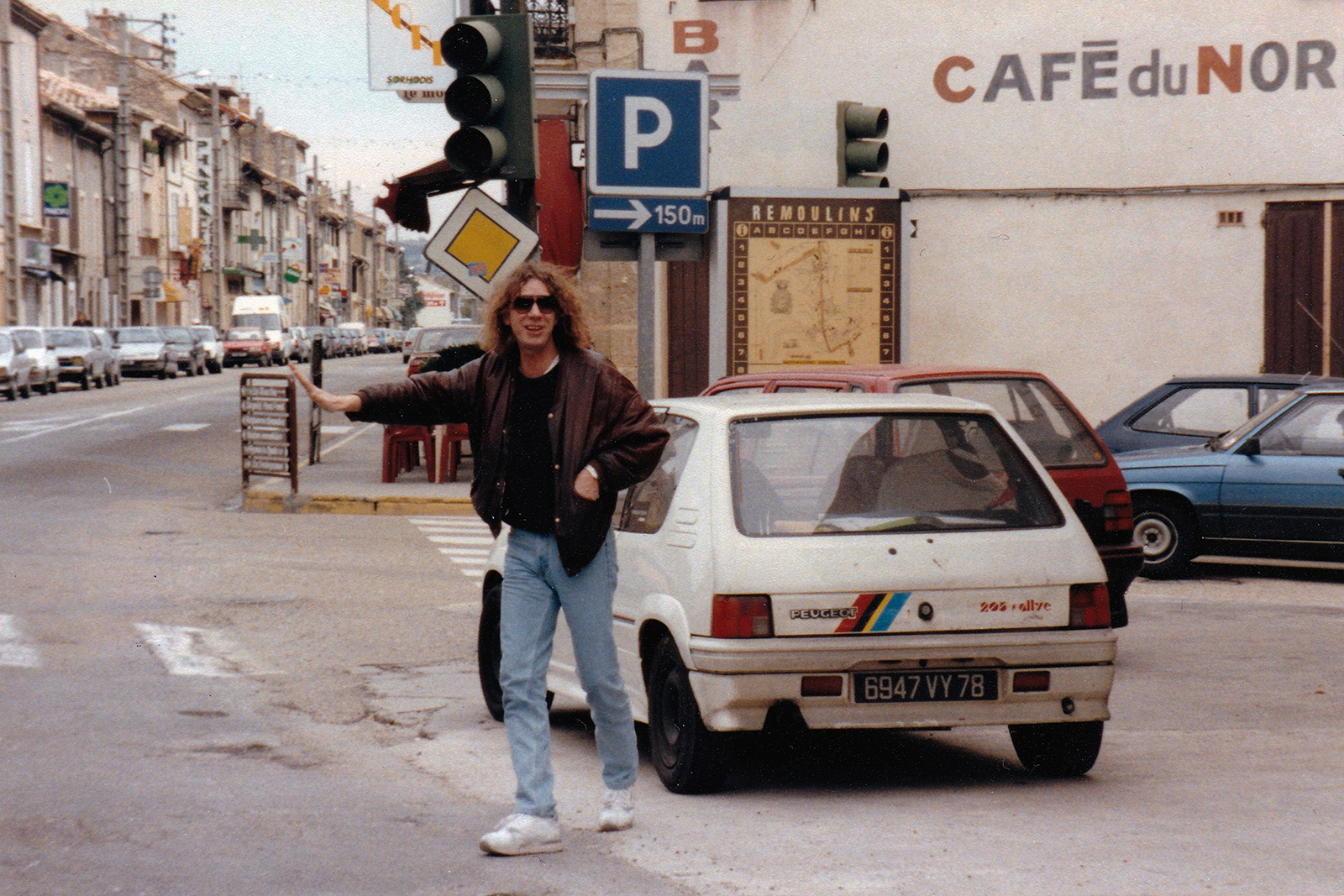 I was the drummer in Kevin Ayers' band on the 1992 Still Life With Guitar tour and had the privilege of playing with the great Ollie, although it wasn't the first time I played with him (before that, we did a Spanish TV video and some concerts in Spain with Kevin Ayers' band).

Ollie played awesome during the tour, I couldn't believe my ears.The band sounded great most of the time (there was Claudia Puyó on keyboards and vocals and Marcelo Fuentes on bass). Roy Wood, the road manager, recorded all the concerts. Unfortunatly, the tapes were stolen in Paris, while we were having dinner at a restaurant. [The Archive does hold some of the recordings courtesy of Roy Wood - Ed.]

Ollie was such a humble person, he never used to talk about himself or the people he had played with. Actually, I learned all about his career after his death.

We got along very well. He used to come every time we played in Madrid with Claudia's group (Los Románticos de Artane). Kevin's tour finished in London (Bernard Shaw theatre). I remember Ollie (and us) singing some daring lyrics to a famous opera leitmotiv, during dinner at a London restaurant.

A couple of days before coming back to Madrid, Ollie took Claudia and I to an Indian restaurant and after that he called a taxi and took us to see London Bridge and Tower Bridge. It was late at night and there was nobody around. It was a foggy night and the scene was very oneiric. Ollie told us about the 1666 Great Fire of London. I think it was his way to say goodbye to us, although he wasn't aware of it.

We were so shocked when he died, we couldn't believe what was happening, we had had great moments playing together during the 30 day tour. Now I can say I feel better sharing these memories with Ollie's fans. I'm one of them.

Besides his work as a teacher at the Escuela de Música Creativa, Quique is working in a project with his own compositions, mixing instrumental music, mixing and rhythms from North, Central and South America.