Excerpts from the article:

"He was one of the best guitarists I have heard. He played passionately right out of his heart and always had the most fabulous original ideas. At the same time he was always very tasteful. I can still hear his unique guitar sound, 35 years later – clear and shimmering.
– My favourite memory is when I played old Louis Jordan records for him. Few English musicians were acquainted with his music at the time and Ollie had a revelation when he discovered this link between r & b, jazz, and rock ’n roll. I wish I had had more opportunities to play with him. He was one of the great!"

Swedish singer and keyboard player Zanna Gregmar was partner with Ollie during five years in the 1980s, both musically and privately. Their relation began when they both worked with Bill Lovelady and it continued in the Spanish based Cinemaspop and in Kevin Ayers band.

Ollie wasn’t an easy person to work with, but though many geniuses aren’t. He was a multitalented person, he also had an artistic side and painted and drew pictures. He was a multi-instrumentalist who could pick up any instrument and start playing it. At the same time he had a completely weird sense of humour and constantly made up practical jokes. He always found a way to make people laugh during travels.

"But he also had quite a temper and was a perfectionist who had incredible demands on his fellow musicians. The reason one could stand working with him was that the result always turned out to be so good, Zanna, who today works as a singing teacher in England, says.
– Ollie could write songs quickly if it was requested. We had a group in Spain called Cinemaspop and in preparation of our second album, the producer, a character we called ‘Dracula’, constantly demanded new songs. So we ended up writing 35 songs in one week! Ollie could always rely on his creative force in all situations!

"He loved all kinds of music, even opera. I remember flying with him to the U.S. where Ollie sat with a walkman on, and all of a sudden exploded loud and clear in ‘La donna e mobile’ so that all passengers gloated at him! He often lived in a world of his own, kind of in another dimension.

"The coolest thing with Ollie’s way of playing was that he in the middle of a solo could completely leave the key of the song just to return right at the end of the solo. It left chills in your body! My best memory of Ollie was when we had a sound check in Majorca when backing the first punk rocker in Spain, Ramoncin. Ollie checked his sound and suddenly went into a guitar solo which made people’s hair stand at ends. Right at that moment his amp caught fire and started to burn. Everyone said that was “the hottest guitar solo ever played”!" 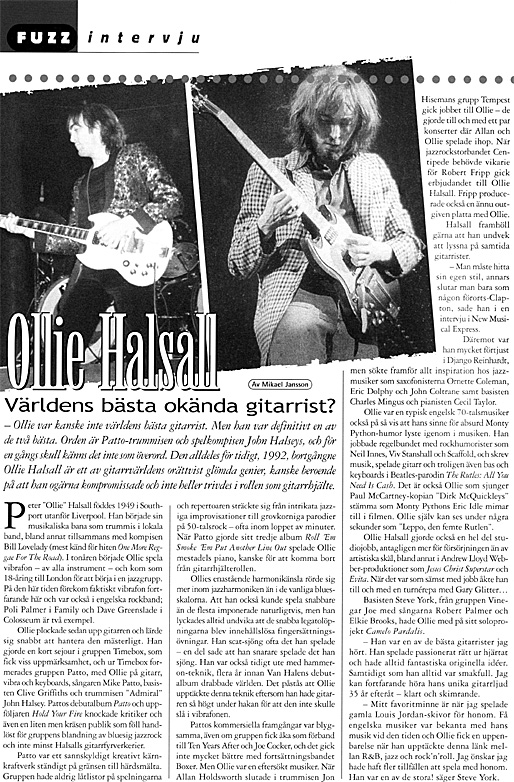