And the ladies sang 'Streets of Laredo'

They had no money for a tomb but the Deia Ayuntamiento let his friends bury him themselves for free. On a summer afternoon in 1992, the urn filled with his ashes was carried twenty feet down a ladder and left in the common tomb at the Deia graveyard. Together with her best friend, she sang the cowboy ballad 'The Streets of Laredo' as they paid their last respects. It had been Ollie's favourite song.

Who was Ollie Halsall?

Left-handed guitarist and vibraphone player Ollie Halsall was born in the north of England on 14 March 1949. He became a founder member of The Take 5, named for the Dave Brubeck jazz number, in 1965. The band moved to London to try their luck in 1966 and soon graduated to touring with bands like The Kinks and The Small Faces. In 1967, they changed their name to Timebox, apparently an American name for a prison cell.

After singer and songwriter Mike Patto joined, Timebox released five singles. One, the terrific instrumental 'Soul Sauce', is now a Northern Soul classic. Timebox became Patto in 1971 and began playing 'progressive jazz-rock'. Ollie's reputation as a guitarist took off. It's claimed he was on the short list to replace Mick Taylor in The Rolling Stones.

Ollie quit Patto in 1973. After doing session work for Kevin Ayers, Ollie became a member of Kevin's band The Soporifics. A brief reunion with Mike Patto spawned Boxer, best known for the cover of their 1976 album Below the Belt, an example of 70s rock sexism at its finest.

Somewhere along the way, Ollie was briefly and bizarrely a member of The Glitter Band backing Gary Glitter. Ollie said Glitter was a monster highly sensitive about his wig. Naturally, Ollie teased him constantly. Which may have been one of the reasons why he was in and out of the band so quickly. He left with a star-shaped guitar and a sparkly jacket.

Today, Ollie is a legend among aficionados of rock and roll guitar. He's Eddie Van Halen's favourite guitarist. Andy Partridge of XTC said of him "He made the guitar sound more like Albert Ayler or John Coltrane, more like a sort of fluid piano player."

The only time Ollie actually troubled the charts in any major way was as an uncredited member of The Rutles. On the top 20 album The Rutles (1978), Ollie played guitar, keyboards and bass and provided Paul McCartney-style lead and backing vocals. In the spoof documentary The Rutles, Ollie is Leppo, the fifth Rutle lost forever in Hamburg.

From 1976 onwards, Ollie played with Kevin Ayers. Kevin had lived in the village off and on since the 1960s so it was inevitable that Ollie would spend much of his time here. When not playing with Kevin and larking around in Deia, he commuted to Madrid where he worked with countless Spanish bands. In 1989 he joined Radio Futura.

Throughout the 1980s, Ollie often played drums with Pa Amb Oli and demanded a certain degree of professionalism, which included not drinking before a show.

According to singer David Templeton, "Ollie got us into shape. But he didn't exactly practice what he preached. On 2 July 1983 we were booked to play a gay gig at a disco in Palma called Barbarellas. Rehearsed, and sober we waited for Ollie. When he rolled up, he was completely paralytic. He played drums on and sang Lesley Gore's 'It's My Party' and 'Heartbreak Hotel'.

Champagne and valium – thank you very much

In a piece written for the Ollie Halsall Archive website, Tomás Graves of The Pa Amb Oli Band wrote:

While working with Radio Futura, Ollie volunteered to chaperone one of the band who had become hooked on heroin. Although a drinker, Ollie had emerged relatively unscathed from his rock career. So it came as a complete shock when he died of an overdose in 1992, having spent all his considerable earnings on heroin. He had been hooked on it by the very musician he was trying to protect, who had insisted that, while a more expensive pastime, there was no danger if you smoked instead of injecting.

On the night of 29 May 1992, in the flat he shared at 13 Calle de la Amargura ('Bitterness Street'), Madrid, desperation drove Ollie to try the cheaper way. He misjudged the quantity and was found dead the next morning. The Musicians' Union paid the expenses and his girlfriend, singer Claudia Puyó, brought his ashes back.

The artist Michael Kane engraved a stone plaque that featured a jack socket, volume and tone controls. When it was finished, he propped it up against the door to get a good look. A gust of wind slammed the door shut and the stone fell, splitting in half. Deciding that there was no point in trying to hide the crack, he made a feature of it by sticking the two halves together with bright blue resin.' The memorial can be seen next to Mati's in the Deià cemetery. I never met Ollie but the woman I followed to Deia adored him. At the first of the three memorial services we held for her, her friend sang "Streets of Laredo". We beat the drum slowly and played the Fife lowly, Played the dead march as we carried him along. Down in the green valley, laid the sod o'er him. He was a young cowboy and he said he'd done wrong.

Reproduce from The Deia Olive Press
with kind permision 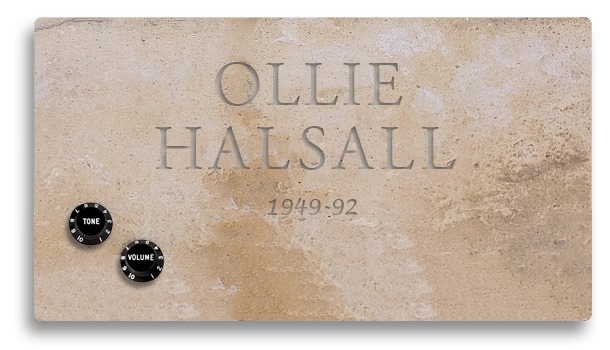 Facsimile of what the memorialt may have looked like originally

The first time I visited Ollie's resting place I noticed that the tone control was missing, so I took a photo and went to my local music shop when I got back to the UK.

"I asked them for a set of tone controls for a Fender Twin Reverb, so they asked me which year the amp was made. I said 'it doesn't matter' to which they responded 'oh yes it does' and proceeded to give me an account of the evolution of Fender control knobs up to the present date.

"I then produced the photo (bit like the one above) to which they said 'Ah'.

"The guy's next comment was 'this is the sort of thing that makes this job worthwhile' so he got me a set of knobs which I posted to Tomás, who fiitted them.

"As I think of it, I may try to get another set to take with me, as they do erode in the weather." 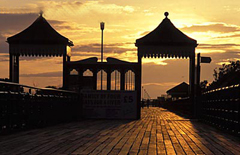 On 16 August 2013 Kevin was reunited with Ollie [playing his usual supporting role!] when a plaque by Sunna Wathen was placed above Ollie's on the churchyard terrace wall in Deia.

The event was attended by many of their friends and a concert staged by The Pa Amb Oli Band at The Sa Fonda cafe in the town.

Obituary from The Southport Visiter