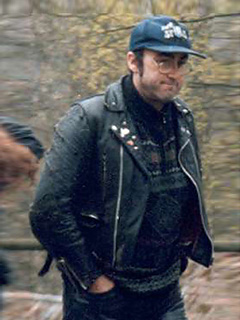 I imagine few people will have been more saddened by the death of Peter ' Ollie ' HalsalI (on 29 May 1992 at the age of 43) than Kevin Ayers who, a month earlier, had played his last gig with a man who was at once his guitarist, arranger, producer and close friend.

During the early 70s a friend of mine had become obsessed with Kevin's 'Joy of a Toy' and would play it at every occasion (on both his territory and that of anyone else with a record player! ) I begrudgingly accepted its obvious merits but thought little more of it. We shared, however, a mutual passion for the music of a local group called 'Patto' and it was with a mixture of surprise and apprehension that I learned of a collaboration between Kevin Ayers and Patto' s guitarist.

In 1965 Ollie, (from Southport in Lancashire) had joined friend and bassist Clive Griffiths in London-based Take 5, later to become Timebox. After acquiring the legendary Mike Patto on vocals, they adopted his stage name (Vertigo Records considered it more accessible in a multilingual and lucrative European market! ) and produced four superb albums of 'progressive' jazz/rock - one unreleased to this day.

Ollie 'defected' to Jon Hiseman's Tempest in 1973 - initially sharing lead guitar duties with no less than Allan Holdsworth (an arrangement that proved to be one guitarist too many! ) Whilst recording the 'Living In Fear' album Ollie wandered into one of Kevin's Dr Dream sessions. His solo on 'Didn't Feel Lonely' (in a style somewhat reminiscent of Patto's earlier 'Loud Green Song' seemed a 'one off' and he featured no more on the finished album. Shortly afterwards, Ollie left Tempest on the pretext that he wanted to do more lead vocals (in conflict with Hiseman's ideas).

It is, perhaps. rather odd then that his next move should be to full time backing work in Kevin's 'Soporifics' for the 'June 1' concert/album and subsequent Autumn 74 tour. On first hearing the live 'May I' from the Rainbow concert, it was clear that this was a partnership 'made in heaven'. Ollie dismisses the original and makes it his own with a magnificent solo (which was to become the subject of most of Terry Theise's excellent appraisal in Guitar Magazine's 'Top Ten' feature of 1976) He does the same with 'Shouting In A Bucket' - flying on the simple but exacting chord changes (These two tracks represent the sum total of commercially available concert material from Kevin and Ollie and the time is now surely right for a decent live set from the 1988 or 1992 tour

It may, at this point, be worth reflecting on exactly how superb a guitarist Ollie was. In the light of the current crop of virtuosi who receive extensive coverage in the music press it is important to realise that Ollie actually invented the fluid 4-finger 'hammer-on' runs taken up by everyone today. He developed this style at Butlins (!) in 1967 where he was obliged to have the guitar strung high up around his neck in order to double on vibraphone - his first instrument This position dictated'a classical' approach and enabled him to achieve extraordinary speed and clarity. Ollie became the most creative, innovative and sensitive player we shall ever hear - and that is bar no-one! It is not for nothing that Patto 'Hold Your Fire' ranks alongside 'Are You Experienced' as one of the essential guitar albums.

Halsall was the guitarist's guitarist in 1972 - as the presence of 'name' players standing 'jaw dropped' in amazement amongst pub and club audiences would testify - and he was, apparently, offered (or at least considered for) Mick Taylor's job in a certain R'n'B combo! The ease to which Ollie could turn his hand to Kevin's unique material is not so surprising. Essentially, despite the guitar 'pyrotechnics', Halsall was an intensely gifted musician - playing keyboards with equal skill and individuality, as well as bass and drums. John Otway, with whom Ollie worked with briefly in 1979, once said that Ollie's greatest attribute was the ability to formalise and structure material to its best advantage - witness Otway's stunning (albeit temporary) transition from lunatic busker to serious rock and roll on 'Where Did I Go Right'' This is further borne out by Kevin's own comments in n 'Bucketful of Brains' interview where he says that Ollie would 'organise' songs and would always remember ideas developed during some rather 'inebriated' sessions.

Ollie and Kevin shared a remarkable empathy, lasting through 10 albums including the recent 'Still Life' on which Ollie is (typically) uncredited (in the UK). Ollie also receives no acknowledgement for his work on many other recordings including some superb bass on 'Deià Vu'. It has been remarked that Halsall's talent is spread somewhat thinly Ayers' recorded output. Remember though that Ollie was a skilled and humble musician who would never do a solo for the sake of it. His overall contribution is far greater than is immediately apparent.

For what seemed to be an interminable period of time in the mid Seventies the albums 'Sweet Deceiver' and 'Mananas' (together with a reunion with Mike Patto on Boxer's 'Below The Belt') provided the only source of reference for post-Patto examples of Halsall's fretboard skills.

I was totally unaware of his other session work (Michael de Albuquerque, Terry Stamp, Otway, Andy Roberts, Neil Innes, The Rutles etc) until much later. These two albums perhaps had an inordinate effect on me but I still rate them as amongst Ayers' finest works. One of the highlights has to be 'Blue' - not so much the ethereal runs, rather irritatingly 'panned' across the stereo image (play this with the mono switch on - it's far better) but, rather, the solo itself, which remains a concise masterpiece.

For other examples, listen to 'Mr Cool' - Ollie's only known use of the wah-wah, 'Sweet Deceiver' (the title track), 'Help Me' and 'Observations', which illustrate an altogether perverse side to this man's playing - No-one else could have got away with that! The pinnacle of this period, however, has to be 'Toujours la Voyage' with Elton John on piano. Ollie is quite aware of the company he is keeping and produces what is probably the most sensitive, poignant and complementary playing of his career. The two solos each glide effortlessly over Kevin's marvellously inspired chord progression with a real jazz feel that could not be matched let alone improved. The fact that the guitar is placed quite low in the mix adds to its subtlety (and makes it infuriatingly difficult to analyse!). If you listen to nothing else, hear this - if you ever thought you could play guitar, listen to this before such conclusions.

Following Mike Patto's death in 1979, Ollie became part of the extraordinary community of artists and musicians who have traditionally resided in the Mallorcan village of Deià. Re-united with Kevin there, the final part of the story unfolds with the albums 'Deià Vu', 'That's What You Get Babe' and the remarkable 'As Close As You Think'. Halsall features here as musician, producer, arranger and writer - to a far greater extent than any other Ayers albums. We even have a Halsall lead vocal on 'Never My Baby' which stands up as a perfectly crafted piece of 'pop'. The solo here is excellent and the song is, I would have thought, clearly his own composition, although oddly credited to Ayers alone. Elsewhere on this album we have the best version of 'Champagne and Valium', 'Too Old To Die Young' (featuring the riff which would later reappear on 'Falling Up' as 'Another Rolling Stone') and the amazing 'Budget Tours' (Pt 1&2) - again, I'm not sure how much Kevin contributed to the joint credit for this stunning instrumental piece.

1988's 'Falling Up' represented an almost serious attempt to market the Ayers 'product' for the first time in many years, with a tour, including UK dates, coinciding. The absence of any promotional material at the concerts (T-shirts, records or even programmes) proved, however, that nothing had really changed. The album featured some strong material, including the excellent 'Am I Really Marcel'. This anthem-like piece is particularly poignant now. Ollie's guitar is a revelation - quite how he achieved the final note in the solo will remain a mystery.

The 1988 tour produced a wealth of 'bootlegs' (although that term- hardly has any meaning in the case of Ayers and co), some of which beg for official release. The 1992 tour will, hopefully, yield some equally good tapes. The final shows at London's Shaw Theatre must now provide our last recollection. There was everything we could have hoped for in a perfect mix of new ('Still Life') and old. Ollie's 2-chord riff to 'Feeling This Way' provided a refreshing alternative to the usual starter 'May I'. He was in fine form, giving no indication of impending tragedy. Sporting baseball cap and 'Lennon glasses' he was just 'Ollie' - his appearance once aptly described in the NME as that of 'a stand-up comic, gone vaguely to seed'! - playing with the unaffected and off-hand style in which he always did.

He was always genuinely surprised that anyone should appreciate his playing at all and often said that he wasn't really interested in music much anyway - but more into 'people' and 'situations'. His intro to the encore ' Why Are We Sleeping' defies adequate description and reduced Kevin to a fit of the giggles for some minutes. Ollie played with his teeth and with the mike stand in obvious parody, and his antics whilst attending to a faulty guitar cable had bassist Marcelo Fuentes literally on the floor with laughter. In Kevin's words "it's playing with someone like Ollie Halsall which makes the whole tedious process of going out on the road worthwhile." They played to a 'small but appreciative audience' and for one brief moment (during the free jazz section in 'Why Are We Sleeping') Ollie was back in 1972.

There is an immense legacy and one could write volumes more... Kevin will not be the same without Ollie, but he will be better for having known him.