To Bee or Not to Be 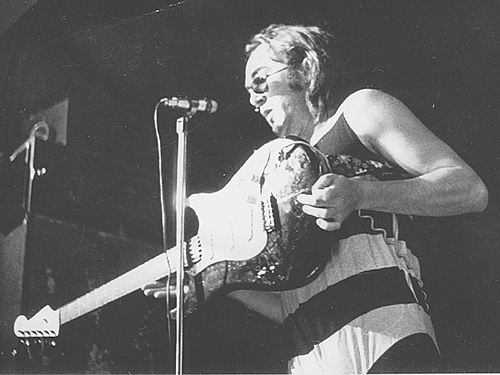 These extraordinary photographs of Ollie wearing a bee costume were taken by Nick Robinson and kindly contributed by Bob Beecher [no pun intended!]:

The photos were taken at the Black Swan on Snug Hill in Sheffield. The photographer would take a batch of every band and advertise them the following week in the pub and the local paper.

At one show, the band decided to form a human pyramid on stage. Guess who was the idiot that volunteered to climb to the top? And I wasn't exactly lightweight at the time. I also remember one show where Clive performed completely naked.

This is corroborated by John Halsey:::

One night I lost my temper with Ollie and we had a shout-up in the dressing room. He had on a Boy Scouts uniform with a spider’s web drawn on his face and is hair Brylcreemed to a point, and I was dressed in lederhosen and silk waistcoat, with a blue face and silver nose! Clive intervened, calming the situation and he was in the nude, just as he'd been on stage!

We loved it when they broke into Hi Ho [The Dwarfs' Chorus] kneeling on their shoes. Shakin All Over, with Ollie jumping off the cabinets to perform the solo. Pure magic."

Bob reports that the photos were taken at the Pattos 'Final Farewell Performance' at The Black Swan, Sheffield on 25 May 1975. [The reverse is inscribed 'FFP' and dated accordingly.]

The odd thing is that the black Fender Stratocaster [played against the microphone stand, like you do] doesn't fit. It seems more like the one he used with Kevin Ayers and The Soporifics in 1974.

According to Brian Godding:

I don't reckon Ollie had that black Strat in 1975 as he brought it round to my house long before then to try and repair it. He'd hurled it into the air at a Kevin gig and it landed head down on the stage with dire consequences! The neck bolts had split the neck like wattle and daub, spitting frets out  in the process. We got it working but it was shite. That definitely looks pre-harpoon to me - Still got frets above the twelfth position!"

Ollie did use a Strat on all three of the 1975 Patto reunions. Immediately before the actual 'Final Farewell Performance at The Torrington, Finchley, North London, it received a drastic modification in the form of the amputation [with a wood saw] of the lower body horn - because "It got in the way"

Since the early Patto days, Ollie's wardrobe included a number of trademark striped jumpers but it seems that this particularly extreme representation has quite a history. The appearance of this rather fetching garment had first been documented in the New Musical Express, 14 December 1974, review of Kevin Ayers' concert at the Rainbow Theatre, London:

At the other side of the stage, totally nullifying the seductive qualities of the languid Kev, is one Ollie Halsall, dressed, as accurately as can be ascertained, as a bumblebee in navy tights and black and yellow corsage. Later Halsall will take flight, playing 'Don't be Cruel' as he swings back and forth suspended on a wire some twenty feet above the other musicians."

I was at the Rainbow concert and am pretty sure these weren't taken there. My memory is not the best in the business, admittedly, but I do remember that Ollie wore a long-sleeved yellow and black hooped sweatshirt for the whole evening. I remember because the shirt was very big - well down past his hips - and he appeared to be wearing black tights or leggings underneath.

"I remember thinking how odd he looked! And I can definitely confirm that, when they were clapped back on for an encore, Ollie didn't appear at first: we heard his trademark beginning of (I think) 'Route 66' - but then it stopped! Then it started again, the band joined in, and yes, he  came flying across the full width of the stage on a trapeze wire. The hitherto weird choice of clothing immediately became apparent - Flight Of The Bumble Bee of course! It was absolutely hilarious, and pure Halsall.

"Ollie did a couple of arcs across the stage (fully 30 feet or more, no mean undertaking, playing blistering rock 'n' roll all the while) before being lowered to the ground to finish the set. I can't swear to it, but I don't remember him playing an upside-down Strat during the whole evening. It was certainly the SG for the finale."

Bernie Holland also places the photos at an earlier time and adds:

Yes, Bernie has been sent to his room.

In the Caves album liner notes, John Otway refers to the Bee at a Patto gig, again at the Rainbow, although I'm not too sure it wasn't, in fact, one of the aforementioned occasions.

A much later sighting - also at the Rainbow, but this time with The Glitter Band in 1978 - is confirmed by 'Admiral' John Halsey, who shall have the last word for now:

The bee outfit was worn by Ollie at the Rainbow Theatre when Ollie was in The Glitter Band. At a strategic point during the show, a rope was hooked onto his belt and he was hauled high up over the stage where he was meant to play a solo of some kind. When it came to that point in the show, the butcher's hook was attached and two hefty road crew hauled him up where he swung about wildly and couldn't play a note through fear, and was heard screaming to be brought down which, in due course, he was - quite heavily.

"But, at that time he would have been playing the star-shaped silver sparkle guitar. He would have had on the wings and would have been wearing the head-dress with the two spring antennae on it, and the black tights and shoes. So, it might be the reunion gig but I don't remember him wearing it. Also, he still had the Gibson SG at that time, I believe.

"The best use the bee outfit ever got was when his next-door neighbour, Bernie, had a wasp nest under the eaves of his house. He called in the wasp man in who put a machine like a vacuum cleaner on the entrance to the nest, which sucked in the wasps as they came and went. this machine was on day and night making a noise which drove Ollie mad.

"One Sunday afternoon an incredible thing happened. On the six-foot high wall that Bernie had built between the two houses (for some inexplicable reason), and with the sun behind it, there stood King Wasp, ranting and raving 'We'll be back. We are going to get you, Bernie, you murderer! You haven't seen the last of us!'.

"Bernie's daughters and wife, who were all sun-bathing topless in the garden, were shocked, and were doubly shocked when the gigantic wasp - who seemed to be acting as if he had just returned home from the pub - fell off the wall, hitting the floor quite heavily instead of flying away or disappearing up the vacuum cleaner nozzle." 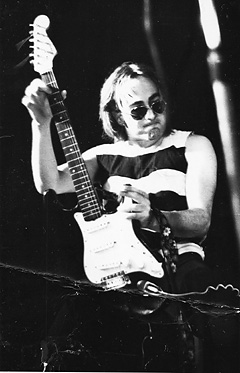 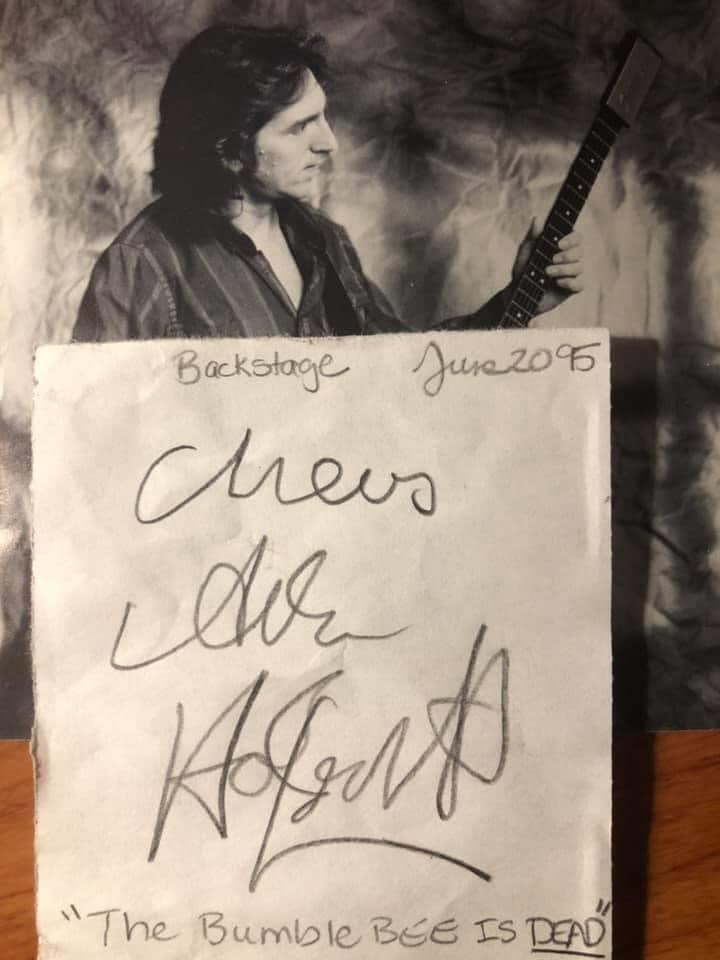 I saw Allan Holdsworth play quite a few times, and talked with him on three occasions. At the Backstage in Ballard 1995, I approached him when I saw him sitting alone at the bar- before showtime. We shared a pint and I asked him about guitarist Ollie Hallsall, whom he had played with in Tempest. Allan became a bit emotional, as my girlfriend approached him for an autograph (for me of course). As he signed it he said “the bumblebee is dead”. I didn’t know it at the time but this was a reference to Ollie- Who would sometimes appear on stage dressed as a bumblebee. 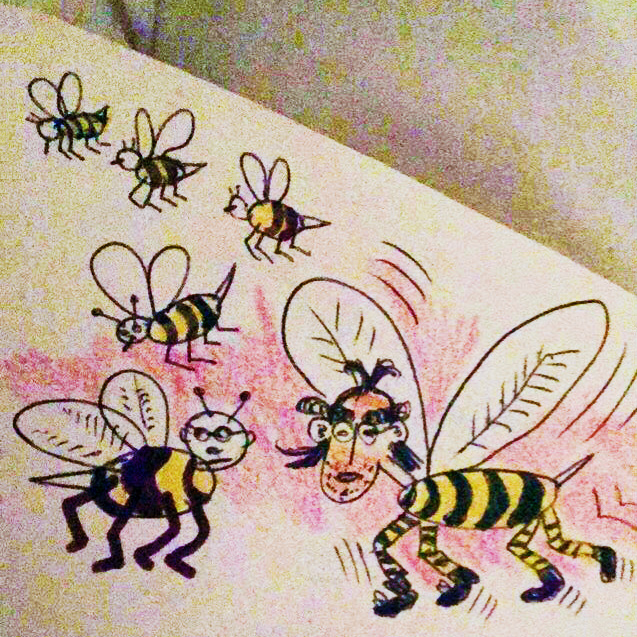 Drawing by Ollie from his daughter, Andrea