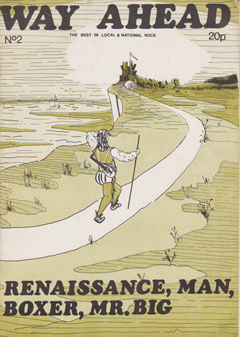 Boxer are the band the mass media and the public have designated as conquerors of 1976. The band itself. although new consists of experienced and prodigious musicians, who've put their ideas and talents together to create a new slant on fairly well-trodden ground. Their debut album 'Below The Belt'. is striking (particularly the cover). and this has come in for more than a little criticism from the 'better class' music shops who refuse to stock this album because of it's Immodest cover.

One-half of the band is really a projection of the underestimated and under-publicised jazz-rock band , Patto. Mike Patto, who lent his name to the former band, is the lead singer in Boxer. Since Patto, he has sung with a band prodigiously called 'Dick And The Firemen' and, perhaps more significantly, be sang with Spooky Tooth for eight months, before taking an office job with 'Good Ear Records', obtained mainly due to his ability and previous contact with stars such as Chuck Berry, The Moody Blues, and the Graham Bond Organization. During his flirtation with Spooky Tooth he met Keith Ellis, now the bass player with Boxer, who is probably best known for his work with early Van Der Graf Generator and Juicy Lucy The band's guitarist is the irrepressible Ollie Halsall who was formerly one-quarter of Patto. He was and is one of the songwriters and mentors of Patto and Boxer and between the two of Jon Hiseman' s Tempest Grimms and Keith Ayers backing band (The SoporIfics). He co-produced Ayers': album 'Sweet Deceiver'. (or reasons best known to himself, under the pseudonym of Ollie Haircut.

It was while with Ayers that he enlisted Tony Newman (ex-Jeff Beck, David Bowie) for the Soporifics and the partnership stuck together in Boxer. Boxer began when Mike Patto, musical executive of infinitesimal importance, had his door assaulted by Messrs . Halsall and Newman, the former whom he hadn't seen for two years, the latter he had never seen, only heard rumours about) They stated in no uncertain terms that they wanted somewhere to practice and a recording contract. Even Patto ' s knowledge of the quality or these bedraggled musicians before him and his esteemed position could not conjure-up the recording contract. But he got the rehearsal room. and did the next best thing, joined them on vocals, after phoning Keith Ellis in New York to ask him to join on bass. Boller are now 'fightin' fit and rarin ' to go' . After a time in the practice ring  challenged Virgin to a recording contract ..... which they won hands down, then proceeded to record the aforementioned knockout album and a similarly punishing single, with the help of some ' succour' punches from Richard Digby-Smith.

The aforementioned album is encased in the previously aforementioned (lack of ?) cover. A special mention here for Stephen Marianne who deserves a big hand! The black round thing with the hole in the middle. whose aesthetic appeal is a little less equivocal than the cover. contains an abundance of good music. It begins with 'Shooting Star', with Patto's vocals reminiscent of early Free. I feel that this would probably have made a good single. but the second track 'All The Time In The World', is the one that was destined to be top of the pops, and I'm sure everyone must have heard it on one of the local stations. California Calling' is perhaps a rather euphemistic view of the Golden State. ' Hip  Kiss ' is a band composition, the lyrics of which leave little t0 the Imagination. The final track on side 1 is a slow bluesy song 'More Than Meets The Eye' In which OIlie Halsall shows his dexterity and the rapid manipulation of his digits. He is somewhat famed for his lightning barrage or notes. and this track is the only indication we gel or his amazingly nimble joints.

'Waiting For A Miracle' the opening track of side 2. maybe familiar to Tempest fans. as this track was on the 'Living In Fear ' album. In its present form, it is far slower than before. and I feel its present lack of synthesizer detracts from the quality. The vocals on This track sounds as though they were recorded in a bathroom or somewhere similar. ' Looney Ali ' finds Halsall unusually playing bottleneck guitar. but he reverts to his usual sing along with the notes on 'Save Me', also using echo to good effect on this. (Very rarely he uses effects of any sort!) Keyboards dominate 'Gonna Work Out Fine' and there are almost backing vocals on this track! The final track a boozy blues called 'Tom Drunk' is about avitaminosis. (a deficiency disease ) a drinking problem to you or I! The vocals are reminiscent of that well-known gas fitter from Sheffield. Joe Cocker and the old blues format is revitalised by Halsall's unique guitar style (by the way):' he also plays the piano and can play rusty vibraphones).

The whole album is fairly rocky with some raunchy, If a little too quiet. bass playing. and proficient drumming behind Halsall's recently less flamboyant style. and PaIlo's greatly improved singing. It will be enjoyed by anyone with a liking for lively. rocky music. Their style is definitive and yet difficult to define but above all. It is an album that Is easy to listen to and an album you will like more every time you hear it. T can't wait for the second round'. 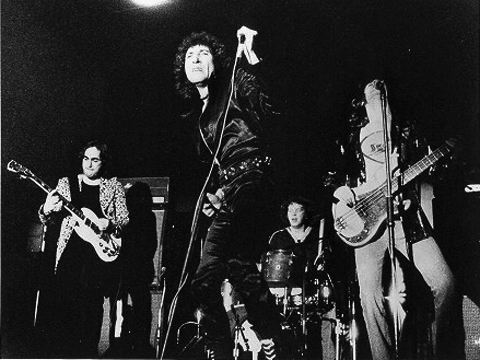