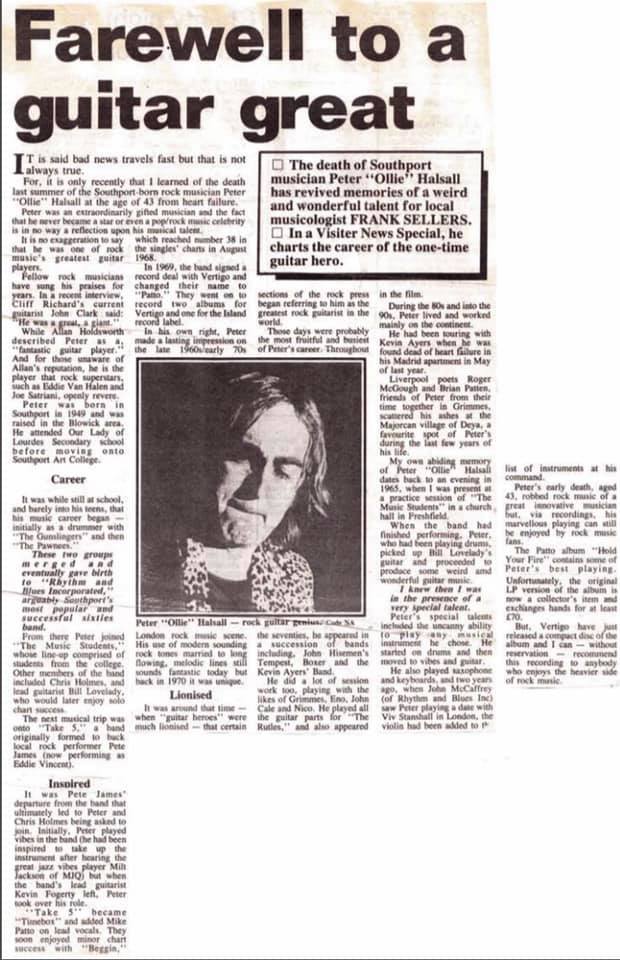 The Southport Visiter is a weekly paid-for print newspaper covering Southport, Merseyside, England. It was founded in 1844 as a single sheet listing visitors to the seaside town.

The death of Southport musician Peter "Ollie" Halsall has revived memories of a weird and wonderful talent for local musicologist Frank Sellers. In a Visiter News Special, he charts the career of the one-time guitar hero.

"We all read about you in The Visiter"

It is perhaps fitting, though somewhat ironic that Ollie's obituary shoul appear in the very local newspaper he referenced in his song Peter Abraham [from the 1972 album Roll 'em, Smoke 'em, Put Another Line Out by Patto] in which he lists the fame and sometimes misfoirtunes of some of his old friends.

It is said bad news travels fast but that is not always true. For, it is only recently that I learned of the death last summer of the Southport-born rock musician Peter ‘Ollie’ Halsall at the age of 43 from heart failure. Peter was an extraordinarily gifted musician and the fact that he never became a star or even a pop/rock music celebrity is in no way a reflection upon his musical talent.

It is no exaggeration to say that he was one of rock music's greatest guitar players. Fellow rock musicians have sung his praises for years. In a recent interview, Cliff Richard 's current guitarist John Clark said: "He was a great, a giant."

While Allan Holdsworth described Peter as, "a fantastic guitar player." And for those unaware of Allan's reputation, he is the player that rock superstars, such as Eddie Van Halen and Joe Satriani, openly revere.

Peter was born· in Southport in 1949 and was raised in the Blowick area. He attended Our Lady of Lourdes Secondary school before moving onto Southport Art College.

It was while still at school, and barely into his teens, that his music career began initially as a drummer with The Gunslingers and then [Pete and] The Pawnees. These two groups merged and eventually gave birth to Rhythm and Blues Incorporated, arguably Southport's most popular and successful sixties band.

From there Peter joined The Music Students, whose line-up comprised of students from the college. Other members of the band included Chris Holmes, and lead guitarist Bill Lovelady, who would later enjoy solo chart success. The next musical trip was onto Take 5, a band originally formed to back local rock performer Pete James (now performing as Eddie Vincent).

It was Pete James' departure from the band that ultimately led to Peter and Chris Holmes being asked to join. Initially, Peter played vibes in the band (he had been inspired to take up the instrument after hearing the great jazz vibes player Milt Jackson of MJQ) but when the band's lead guitarist Kevin Fogerty left, Peter took over his role.

In 1969, the band signed a record deal with Vertigo and changed their name to Patto. They went on to record two albums for Vertigo and one for the Island record label

In his own right, Peter made a lasting impression on the late 1960s/early 70s London rock music scene. His use of modern-sounding rock tones married to long flowing, melodic lines still sounds fantastic today but back in 1970 it was unique.

It was around that time when "guitar heroes" were much lionised -that certain sections of the rock press began referring to him as the greatest rock guitarist in the world. Those days were probably the most fruitful and busiest of Peter's career. Throughout the seventies, he appeared in·· a succession of bands including, John Hisemen's Tempest, Boxer and the Kevin Ayers' Band.

He did a lot of session work too, playing with the likes of Grimms, Eno, John Cale and Nico. He played all the guitar parts for "The Rutles," and also appeared in the film.

During the 80s and into the 90s, Peter lived and worked mainly on the continent. He had been touring with Kevin Ayers when he was found dead of heart failure in his Madrid apartment in May of last year. Liverpool poets Roger McGough and Brian Patten, friends of Peter from their time together in Grimms, scattered his ashes at the Majorcan village of Deia, a favourite spot of Peter's during the last few years of his life.

My own abiding memory of Peter "Ollie" Halsall dates back to an evening in 1965 when I was present at a practice session of The Music Students in a church hall in Freshfield. When the band had finished performing, Peter, who had been playing drums, picked up Bill Lovelady' s guitar and proceeded to produce some weird and wonderful guitar music. I knew then I was in the presence of a very special talent.

Peter's special talents included the uncanny ability to play any mu.ical instrument he chose. He started on drums and then moved to vibes and guitar. He also played saxophone and keyboards, and two years ago, when John McCaffrey (of Rhythm and Blues Inc) saw Peter playing a date with Viv Stanshall in London, the violin had been added to the list of instruments at his command.

Peter's early death, aged 43, robbed rock music of a great innovative musician but, via recordings, his marvellous playing can still be enjoyed by rock music fans.

The Patto album " Hold Your Fire" contains some of Peter 's best playing. Unfortunately, the original LP version of the album is now a collector's item and exchanges hands for at least £70.

But, Vertigo have just released a compact disc of the album and I can - without reservation - recommend this recording to anybody who enjoys the heavier side of rock music.