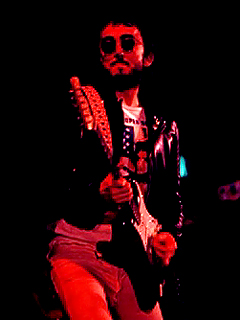 The time was approximately 1970-71. The group was Patto. The guitarist was like no guitarist anyone had ever heard.

For what it's worth, Olly (sic) Halsall and Patto did a lot of things first, or very nearly first, from odd meters and sub-divided meters to those remote uncanny lines the guitarist played, which assisted significantly in broadening the vocabulary of rock guitar.

What was so unique about Olly Halsall? Well for a start, he was the first rock guitarist I ever saw use all four fingers individually while soloing.

True, Alvin Lee, among others, would use the fourth finger to reach a note uncomfortably far from the third, but Halsall had a wholly different way of scanning the frets which involved the constant interaction of all his fingers (in the sense that jazz players use them).

But, unlike jazz guitarists, Halsall didn't enunciate each note with his picking hand. Through hammering on and off and slurring he created a style of amazing fluidity ideally suited to playing long fast passages without fatiguing his picking hand.

These days the technique is common, but Halsall is quite possibly the originator.

Now let's go back to Patto and Money Bag , a track from their first album.

No key centre, no time signature, nothing. It hangs together tenuously through the insidious interaction of the rhythm section.

The format gives free rein to Halsall, who free-forms most inventively for well over seven minutes. 'Scales', scoffed a guitarist friend upon his first hearing. A moment later, nonplussed, 'No, those aren't scales.'

By the end of the solo, my thoroughly befuddled companion wondered whether Mr Halsall was playing with a full deck. What confused him was the fact that the guitar was playing uncharacteristic sax lines.

There's no conventional way to analyse these solos: as whole statements they are elusive. But the lead on How's Your Father builds very nicely through it's shifting keys, while the solos on See You At The Dance Tonight are incredibly liquid and fast.

Patto broke up after a rather messy third album and Halsall shopped around. Most unfortunately, he has never found the leverage he had with Patto, and one must search through a lot of dross to find a performance like the ones from 'Hold Your Fire'.

He solos spectacularly on Momma Bee from Neil Innes' 'How Sweet To Be An Idiot' album, but is inaudible on most of the other tracks.

Incredibly, the LP he made as a member of Jon Hiseman's ill-conceived Tempest contains only two solos, both excellent.

It's a difficult section to play over, minor and major seventh chords changing each measure, and occasionally Halsall doesn't sound sure of where he is, but he follows the changes and plays an intensely pretty series of lines.

The diagram presumes the key of A. Play it from left to right, bottom to top. Strike only the 1 notes and hammer the 2 and 4. The curved line means to slide your finger, This is the skeletal figure in much of Halsall's soloing, as opposed to the blues scale most rock guitarists use. Now play it backward. Now jumble it up a bit. Now you play just like Olly. Here's another clue. Play it in the key of B minor, and then in the key of G. and watch what happens.
Terry Theise
Guitar Player magazine 1977