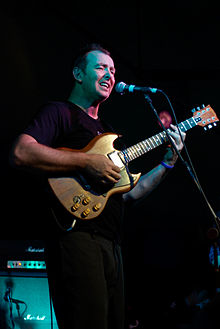 I will never forget the day that my brother first played me Ollie Halsall's solo on San Antone. I was absolutely blown away. There was something about the swing and the sound of that track that I really identified with. It was a real eye opener on what's possible when you take musical risks and put yourself out there.

Ollie was one of my brother [Barry 'Baz' Dunnery]'s favourite guitar players and is still one of mine. I actually think my brothers band Necromandus opened for Patto sometime in the early seventies. My brother said they were astonishing live.

I later got to experience all Ollie's work and tracks like government man and money bag clearly illustrate Ollie's technical ability. The yellow Patto album (as I call it) was a huge influence on my brothers playing and has been a staple diet for my vinyl, cd and now itunes playlists.

I play Patto on my radio show and I always find myself returning to that solo in San Antone. When my brother died a few years ago I decided to put together a band and record some of my brother's early music. Knowing that my brother loved Ollie's work so much I included a part of the solo from San Antone on a track called 'Don't look down Frank'. It's a little hat tip to Ollie who my brother got so many years enjoyment from while he was alive.

There's only one Ollie Halsall. Unpolished, real, authentic and a guitar players guitarist. God bless Ollie, you were the real deal.

Francis first hit the public stage back in the eighties as lead vocalist and guitarist for the progressive rock band ‘It Bites’. He has since gone on to have a very successful musical solo career spanning thirty years.

During this time he has written, produced and performed music with some of the most successful artists of his time, artists such as Led Zeppelin’s singer Robert Plant, guitar legend Carlos Santana, Squeeze’s stalwart Chris Difford, Stone Roses’ singer Ian Brown, R&B superstar Lauren Hill, Genesis guitarist Steve Hackett as well as guesting with a host of bands and artists such as Yes, Hootie and the Blowfish and The Syn.

Francis is accomplished in his own right, turning out ten engaging albums of original yet diverse composition and three DVDs.

And, yes, he's a fan of Ollie Halsall. This as brought to our attention on the Ollie Halsall and Patto Fan FaceBook Group by Colin Johnson:

And here's the reference at about 1:30

IT BITES
Calling All the Heroes 1986