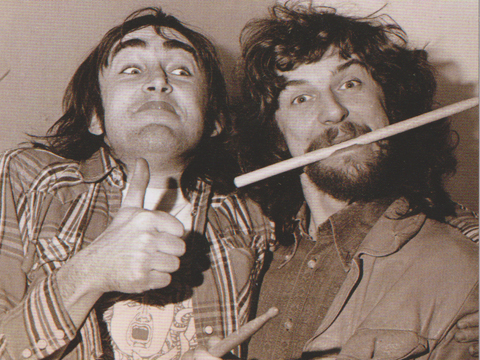 Ariel sings and helps to attire him:

"Where the bee sucks, there suck I.
In a cowslip's bell I lie.
There I couch when owls do cry.
On the bat's back I do fly.
After summer merrily.
Merrily, merrily shall I live now.
Under the blossom that hangs on the bough."

You and Your Love

"Allan [Holdsworth] was very meticulous, very clear. He had a vision about what he was trying to do. Ollie was a lunatic, a chameleon, again: in any circumstance he'd find a way to make it work. Interesting guy! I liked Ollie a lot.

"I never heard him in PATTO, no. He just came recommended to me, and when we played we hit it off, I thought he was great. When we were a trio, we did some fantastic gigs - Mark Clarke, Ollie and me.

Just prior to their Queen Elizabeth Hall gig on 27 May 1973, Tempest had briefly expanded to a quintet.

Guitarist Ollie Halsall, who had been recommended to Hiseman by mutual acquaintances, had spent the end of the Sixties with Jazz | Soul | Pop | Psychedelic oddballs Timebox, who morphed into Patto at the turn of the decade. Highly regarded by the era's critics, but ignored by the general public, Patto had released a trio of albums before falling apart in April 1973 while working on an aborted 4th LP, Monkey's Bum.

[Black suggests, in his between-song chats, that Halsall had 'wandered along to a rehearsal' the day before the gig, and had been taken on by Tempest only at that juncture, but, given that Ollie had played them at the Queen Elizabeth Hall a week earlier, this is clearly a slight exaggeration]

Pressed for radio station use as a regulation BBC transcription disc, this show remains a fascinating, vital document for reasons other than track selection.

As can be heard, the duelling, twin-pronged leads of Holdsworth and Halsall, particularly evident on a coruscating version of 'Strangeher', gave the band an even greater sonic attack, and the burgeoning partnership between two master guitarists hinted at all kinds of tantalising possibilities for the future direction of Tempest.

Sadly, however, things weren't quite as they seemed. To the outside world, it appeared that Halsall had been brought In to act as both foil and catalyst to Holdsworth's mercurial talents: in fact he was a straight replacement for the latter who, as Jon Hiseman now admits, was "never happy with Tempest - he wanted lo play more Jazz. Allan had indicated his intention to leave the band, and I had asked Ollie to join as his replacement. But we had a commitment to play for the BBC, and so Ollie and Allan played the Hippodrome gig."

Holdsworth duly left (by the end of the year he had pitched up in Jazz|Rock veterans Soft Machine), as did Paul Williams, unable to cope with the rigours of overseas touring.

Suddenly down to a trio, Tempest elected not lo seek a replacement for Williams, with Ollie Halsall - and , to a lesser extent, Mark Clarke - taking over vocal responsibilities.

After appearing alongside the likes of Black Sabbath, The Faces and Rory Gallagher at a 2-day open-air festival in Frankfurt in late August, the reconstructed Tempest played at the Reading Festival, their performance acclaimed by Sounds as:

" . . . a longish set full of heavily accented guitar numbers. Jon Hiseman played with his usual never ending drive, though these days he's playing a lot more straight Rock than he did with Colosseum. But, then again, Tempest IS a hundred miles away from Colosseum and, for my money, a whole more listenable."

That was quickly followed by a ringing endorsement In the New Musical Express by Tony Stewart, who'd caught the band at The Marquee:

"If you need any assistance when naming the most promising band of '73, look no further than Jon Hiseman's trio" he boomed in October. "Behold, a vanishing culture in music - that of the funky three-piece Perhaps there have been others m a similar mode, like Mountain, West Bruce & Laing, and on a lesser scale Trapeze (and we still have Budgie): but if we're honest, we were all spoilt a little by Cream, and those never made the same grade. Hiseman's Tempest will."

That Marquee performance, however, was a rare British gig for Tempest. During an interview with the NME, Jon explained that, for economic reasons, they preferred to play In Europe, where Colosseum's bedrock of support had always been, rather than In the UK:

"The gigs in Britain are too small. And there aren't any facillities. Our halls, without exception, are awful -including the new ones. I often think they should open up the cinemas for gigs, because I think they're probably the nicest venues. But they don't do that."

He also explained why he'd decided that Tempest should be a smaller, more adaptable aggregation than Colosseum:

'The more people you have, the more interesting the music is tonally, but the more it has to be arranged. This means it has less chance to change and develop -and that's why I wanted this band to be a three-piece.

"The first Tempest was a four-piece, but it was meant to be a three-piece in that I'd always planned to combine the lead vocals with a lead instrument. The trouble was I couldn't find a lead instrumentalist who could sing as well. So the band now is really a fulfilment of that original Idea.

"In October 1973 the band returned to AIR Studios to begin work on their second album, Living In Fear, with producer Gerry Bron and former Beatles engineer Geoff Emerick. According to Jon Hiseman, however, the song's inclusion was down to him: "I wanted to do a Beatles track -I love the Beatles! I thought 'Paperback Writer' was a great song, and it wasn't one that other people did much . . . "

The rest of the material was split between two songwriting camps. Mark Clarke and Susie Bottomley collaborated on a trio of songs, including 'Stargazer' -subsequently covered by Uriah Heep mainman Ken Hensley on his solo album Eager To Please, and bearing a nagging, circular guitar riff that would mysteriously reappear a year or so later on Led Zeppelin's Physical Graffiti track 'Trampled Underfoot'.

The lengthy 'Dance To My Tune' was essentially a state-of-the-art early Seventies British Hard Rock creation that interpolated an unexpected Moog synthesiser passage, while the triumvirate of Clarke|Bottomley songs was completed by the album's closing track, the pulsating 'Turn Around'

Ollie Halsall, however, was the creative hub of 'Living in Fear. In addition to dabbling with the Moog for the first time in his in career, he was lead vocalist, pianist, guitarist and sole songwriter (except for 'Yeah Yeah Yeah', co-penned with Jon Hiseman) on I the remaining material.

Arguably the strongest track was the propulsive, highly-charged opening track, 'Funeral Empire', but he also took centre stage with some typical guitar heroics on the mordantly witty title song and the infectious, chorus-based 'Yeah, Yeah, Yeah'. Also worthy of note was 'Waiting For A Miracle', which displayed Ollie's off-kilter Pop nous, with a McCartneyesque vocal and melodic sensibility allied to some delicate acoustic playing and incongruously eccentric use of the Moog.

Issued in April 1974, Living In Fear was a powerful album - but the British music press, in their customary 'build 'em up - knock'em down' mode, begged to differ. Just a few months after he'd assured his readers that Tempest were on course to become the greatest three-piece since Cream, the NME's Tony Stewart recanted his previous eulogy to condemn Living In Fear as:

" . . . an example of just how wrong it is to assume three good players make for one fine band. Tempest may be musicians, but they definitely are not songwriters or singers . . . as a whole, the set is dismal and disappointing. Tempest came over as having very little purpose in existing, because the music neither provides listener enjoyment or seemingly any fun for them."

The band plugged the album with few gigs in England and a further BBC session before returning to the Continent - but not before they'd started work on a proposed third studio album.

On 4 April they entered AIR Studios in the company of producer Rod Lynton (formerly leader of British Psychedelic band Rupert's People, but more recently a John Lennon sideman) and engineer Geoff Emerick to cut two new Ollie Halsall songs. 'You And Your Love' and the excellent, Beatles-ish 'Dream Train' - which, in edited form, may even have provided the band with a highly useful hit single. Sadly, however, it wasn't to be, and Tempest's final batch of recordings were destined to remain in the can (until this anthology, at least).

By this stage of the game, Ollie had become increasingly disillusioned. At the same time that Tempest had been recording Living In Fear at AIR, Kevin Ayers was working on his latest solo album, Confessions Of Doctor Dream. Invited to play a guitar solo on the track 'Didn't Feel Lonely Till I Thought Of You', Halsall enjoyed the experience so much that, in June 1974, he quit Tempest to join Ayers's band (though he would almost immediately re-join Mike Patto in Boxer, with whom he would re-record 'Waiting For A Miracle').

"When I joined Tempest, I was surprised by the amount of Heavy Metal material that they were doing", he rationalised to Melody Maker in July. "I was very surprised, because I thought they were going to be into something very different from that, because I was writing the material.

"I wanted them to do more songs, but I don't think they really wanted to be drawn in that direction. I was always more Interested in singling and songs and writing than Instrumental things, but Jon Hiseman always wanted an instrumental-based band."

Given that late-period Tempest was essentially Halsall - chief singer, songwriter, guitarist, pianist, synth-player - plus a rhythm section. Ollie's comments on the band's musical direction might well be considered a trifle disingenuous. Be that as It may, his departure sounded the death-knell for Tempest.