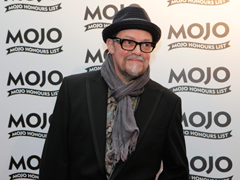 The one guitarist who was a tremendous influence on my own playing, way back in the very early 1970s, (and before Be Bop Deluxe,) was the wonderfully wayward, and now sadly late, Ollie Halsall, of the UK band 'Patto.' (Previously 'Timebox' in the '60s.) Ollie's playing really hit me hard back then and you can hear his inspiration in a lot of my soloing from the Be Bop Deluxe period.

So many young players seem to be unaware of Ollie's talents. He played vibes and piano as well as guitar, had a great sense of humour, both on stage and in his musical phrasing, yet could turn on a sixpence from absurdity to sublimity in his solos.

Here's one of his more unsubtle, reckless rock moments...'Loud Green Song' recorded in 1972. Just wait for Ollie to cut loose on his SG Custom. Shredding? It was already shredded and dealt with by Ollie before the rest of us caught on! And by then it was too late.

I had the first two Patto albums back in the day and loved them. Stylistically they were exactly right for where my own tastes lay at that time. But I'm a restless soul and my musical horizons have broadened somewhat and I guess I've embraced many of the changes in rock music over the last 40 years or more. I tend not to dwell on my own '70s recorded history either, I'm always looking for something new to chase.

Ollie was ahead of the times in many ways. But I have no doubts about the musicianship of the entire band, they were all great musicians.

I've never stopped playing, recording, collaborating, etc. I have had well over a hundred albums released throughout my life as a professional musician.

'Ambient' music is just one facet of what I've explored over my 40 year career. I'm soon to release an album of guitar instrumentals I made in collaboration with the great Reeves Gabrels, ex-Bowie guitarist and now member of The Cure. You should also check out my website if you're curious at www.billnelson.com